British electro-rock band IAMWARFACE can do no wrong when it comes to making music as far as I’m concerned. Based in Brighton and London, their aggressive name is a fitting metaphor for their bombastic high-energy, groove-based sound, and they rank high among my favorite UK bands. In addition to founder and frontman Matt Warneford, the band members include Lou Matthews (guitars), Tom Howe (DJ synth), Mike Smith (bass) and Adam Stanley (drums). 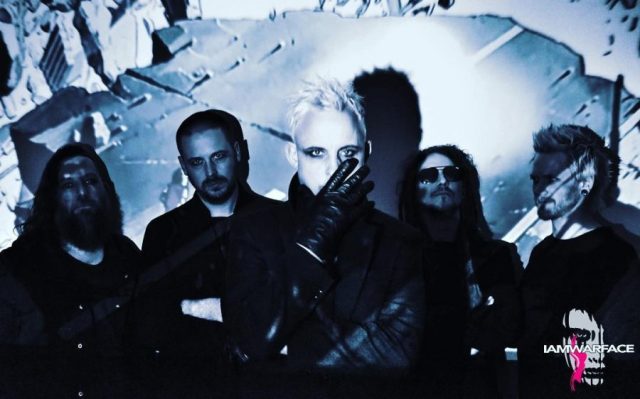 I first featured them on this blog in 2016 when they released their face-melting debut single “Say My Name”, then again in July 2018 with the release of the magnificent “Closer“. I loved both tracks so much that they peaked at #1 on my Weekly Top 30, and “Say My Name” placed at #14 on my Top 100 Songs of 2016, and “Closer” at #8 on my Top 100 Songs of 2018. They now return with another incredible, hard-hitting single “Fear the Future“, providing further proof (as if any is needed) that these guys are phenomenal musicians.

The song launches with Adam’s smashing drumbeats, Tom’s grinding synths and Lou’s jagged riffs, all hallmarks of the band’s signature electrifying sound. As the track progresses, layers of sparkling industrial synths and jangly guitar are added to the mix while Mike lays down a pulsating bass line that drives the song forward. Matt has a powerful, resonant singing voice, and he raises adrenaline levels here with his arresting, passionate vocals that soar to the heavens in the chorus as the instrumentals reach a spine-tingling crescendo.

The biting lyrics seem to address the bullshit and fear-mongering being fed to the masses in a pernicious attempt to dumb-down and divide us, thereby allowing us to be controlled.

Its all i hear
It gives me the creeps

IAMWARFACE have another massive hit on their hands with “Fear the Future”. While they may fear the future with regard to the current fucked-up sociopolitical state of things, they needn’t fear for their future as a band on an straight upward trajectory.

One thought on “IAMWARFACE – Single Review: “Fear the Future””