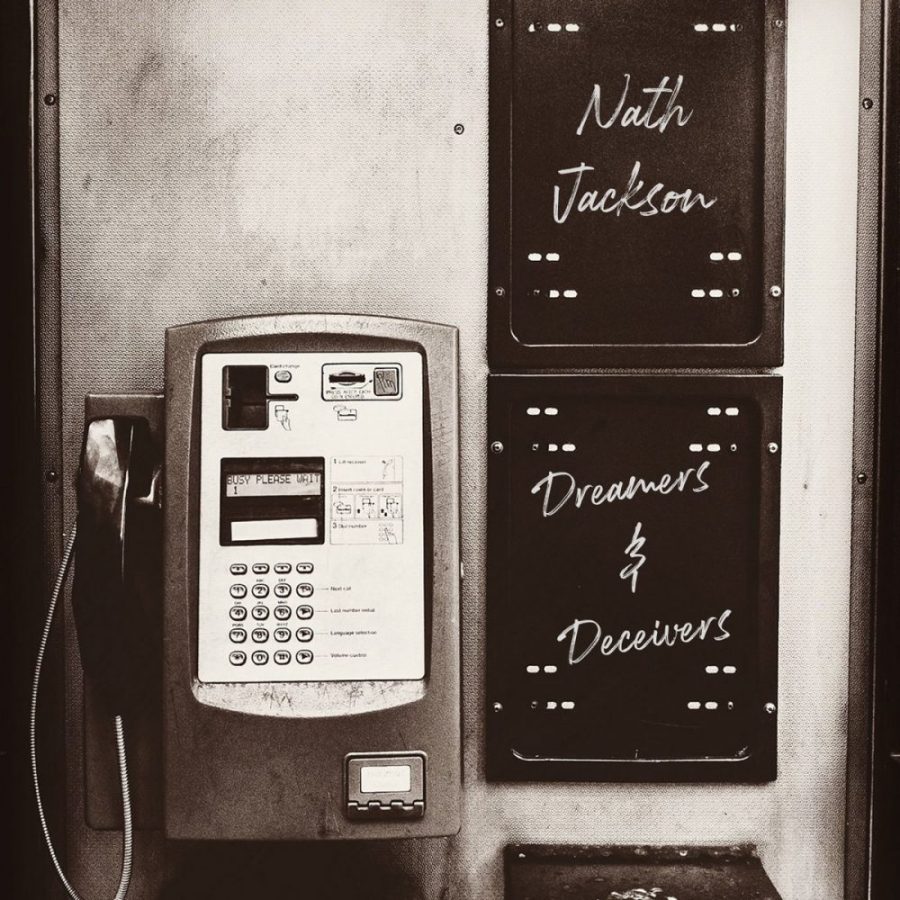 June 5th was a popular day for new music releases, and I’ve been writing about a fair amount of it over the past few days. My latest entry is the new EP Dreamers & Deceivers by British singer-songwriter and guitarist Nath Jackson. I first learned about the talented Leeds-based artist last summer when I reviewed an EP by electronic music project The Ocean Beneath that he collaborated on. He co-wrote and sang the lyrics on two of the tracks on that EP, and I was really impressed with his beautiful vocals.

Nath has now released a collection of songs with his own debut EP. Once again, he collaborated with The Ocean Beneath, who produced the EP. Backing vocals were sung by his brother Aaron Jackson, with drums performed by Karl Rigby. The EP contains four tracks, the first of which, “Oncoming Storm“, was released as a single last December (you can read my review here). It’s a hauntingly beautiful number, highlighted by Nath’s gorgeous strummed acoustic guitar, melancholy but lovely piano keys, and gentle cymbals evoking waves crashing on the shore in advance of an oncoming storm. His smooth, clear vocals are urgent yet comforting as he sings to someone afraid of committing themselves to love or even to life, for fear of being hurt: “But it’s all too little too late. If life’s a game then you better play. From the upside to the down. The lost and the found. You better move soon before you hit the ground. And they’ve all got something to say. Waiting for those better days. From the love that you choose. There spreading out the news. Where do you go when you got nothing to lose? Nothing to lose.”

“Setting Sun” was one of the songs he co-wrote and sang for The Ocean Beneath’s EP. Their version had a lush and mesmerizing synthwave approach in the style of Giorgio Moroder, whereas Nath’s version is more stripped-down, with stunning layered acoustic and electric guitars, drums and gentle orchestral synths. Both are wonderful and I love them equally. I love the sound of his vocals as sings of someone trying their damnedest to avoid committing to love: “Well you may be the last one standing. The devil’s on your tail but you keep on graspin’. Sail your dreams out to the sea. Pulling on the line and bring them home to me. The love light and watch it shine. And I won’t stop until you are mine. You don’t know what you’ve become. And you can’t hide behind the setting sun.”

The Beatles-esque “Blink of an Eye” starts off with just Nath’s piano keys and plaintive vocals, then the music gradually builds with added percussion, strings and guitar to become a beautiful, uplifting anthem. With his brother Aaron’s soaring chorus in the background, Nath entreats a loved one about what I’m guessing is an attempt to try and get their relationship back on the right track: “Maybe there ain’t time to look back. Trying to keep peace of mind. Staying on the right track. Well I guess no one’s to blame. Or in other words, stop sliding away, before it hurts. You keep on coming in and out of my head. Wanna say the things the things that are better left unsaid. We can dance under the moon. I’ll be your fool. Make up our own rules. Staring deep into space. And we’ll watch the world go by. Within the blink of an eye.”

The title track “Dreamers & Deceivers” has an edgier folk-rock vibe, with a lively guitar-driven melody. I like the mix of acoustic and swirling electric guitars, and the organ adds a nice textural sound to the proceedings. The lyrics speak of both parties coming to the realization that their relationship is broken beyond repair, and it’s time to end things and move on: “Fingertips away but oceans apart. An exit to an overplayed part. As you stand, you dream and deceive your way to the end of the line. Hit the road always the first to say, it’s time now baby, bye, bye, bye. The air that you breathe, the money you need, it feels like you’re gonna explode. Hold on to one last look. It’s high time I gotta go, go, go, go go.”

Dreamers & Deceivers is a terrific little EP, and my only criticism is that I wish it had more than just four tracks. Nath is a fine songwriter, guitarist and vocalist, and I could listen to his pleasing music for hours. For now, I’ll just have to play his EP on repeat until he releases more music.