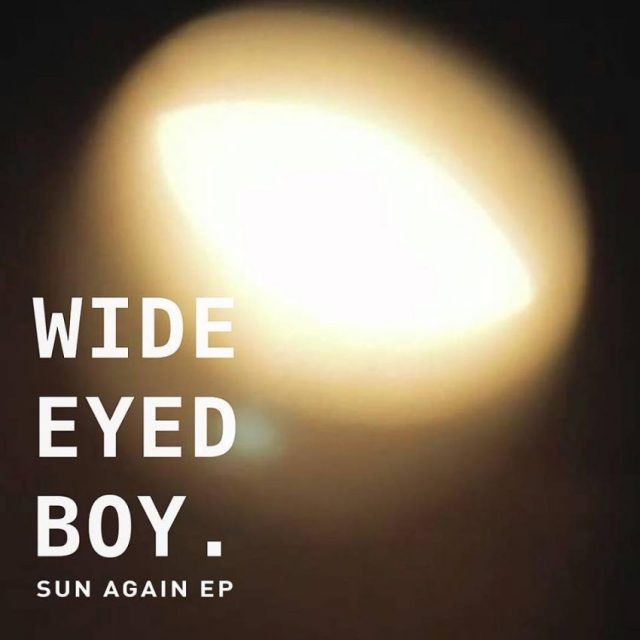 Since first hearing their incredible debut single “Wolves” two years ago, I’ve been totally smitten with British band Wide Eyed Boy. I’ve featured the charismatic Liverpool foursome on this blog three times now, beginning with my review of “Wolves” almost exactly two years ago, in February 2017, then a review of their magnificent follow-up single “Loving You is So Easy” that July, and an interview in May 2018, shortly after the release of their third single “Sun Again”. They’ve just dropped their first EP Sun Again EP, and it’s my pleasure to feature them for the fourth time.

Wide Eyed Boy consists of Oliver Nagy (Vocals), Jonny Ball (Guitars), Kobi “Danger” Pham (Guitar, keyboards) and Tom Taylor (Drums). They all met at the Liverpool Institute for Performing Arts, and quickly bonded over their shared love of music. They made the decision to release a series of singles to get their music out there and heard, and they’ve succeeded quite nicely. Since the release of “Wolves”, they’ve earned a reputation as one of Britain’s best indie bands, and have gained a large following of loyal fans.

The EP includes their three aforementioned singles, plus two new tracks. It opens with the title track “Sun Again,” an exuberant affair, with roiling riffs of Jonny and Kobi’s fuzzy guitars and bass, propelled by Tom’s furious drums and wildly crashing cymbals. Oliver has one of the most beautiful voices around today, and his smooth, clear vocals are dazzling, soaring along with the instrumentals as they build to a goosebump-inducing crescendo. About the song, the band states: “It’s about escape. Breaking out of that vicious cycle of mundane life and getting back that sense of freedom to go do whatever the hell you want.”

The beautiful new video just released for “Sun Again” features actor Daniel Donskoy, and alternately shows scenes of Wide Eyed Boy performing the song, and scenes of Donskoy portraying a man who’s angry and in distress, racing his car through the English countryside, then running from the car into a field and collapsing on the ground, spent and finally feeling free.

I loved “Wolves” the moment I heard it, and made me an instant fan of this band. Everything about this phenomenal track is perfect – the haunting melody, compelling lyrics, flawless arrangement and production, propulsive drumbeat, gorgeous sweeping synths, nimble, layered guitars, and Oliver’s incredible vocals that are absolutely mesmerizing. Oliver stated the song ‘is about letting people in that are bad for you.’ He passionately sings “Why can’t I leave it all behind? Why can’t I save myself this time? I fall just a little bit, don’t wanna be a part of it. Wolves are the only friends I know.”

“Wolves” was so awesome that I didn’t think the guys could top it, but I was even more blown away by their magnificent follow-up single “Loving You is So Easy“. The swirling guitars, sultry bass line, sweeping gnarly synths and Oliver’s captivating vocals are all positively breathtaking. The song lyrics are fairly straightforward – “I don’t care the way you care. I can see it in your stare. But the way that we collide, it’s getting harder every time. Loving you is so easy. Easy when I’m down, down, down” – but Oliver delivers them quite seductively, before launching into a soaring falsetto in the chorus, adding more chills to the ones already covering my body. I love this song so much it ranks #13 on my Top 100 Best Songs of 2017 (“Wolves” was #17).

Next up is “See the Light“, yet another beautiful song from this amazing band. This track is slower in tempo and more ballad-like than their other songs, with acoustic guitar, shimmery synths and gentle percussion. The song is about a relationship that’s failed past the point of return and the desire to move on. Oliver’s heartfelt falsetto vocals are sublime as he plaintively sings the poignant lyrics: “I’ve gone missing. Something’s not alright. I don’t wanna run but I’m struggling to see the light. / Can’t you see what I’ve become? Stay away from me.”

The band closes out the EP with the rousing pop/rock banger “Fire“. The radio-friendly track features a catchy melody, pulsating synths, chiming guitars and pummeling drums that all build to an exciting crescendo in the chorus. The lyrics are a plea to someone for whom the singer has strong feelings to save him with their love and support: “Fire! I’m burning now. I really need you now. Fire! Don’t let me down. Pull me from the ashes.”

Sun Again is an awesome little EP with five outstanding tracks, and a testament to Wide Eyed Boy’s impressive songwriting and musicianship. I cannot wait to hear what new songs they come up with next to dazzle our eardrums.