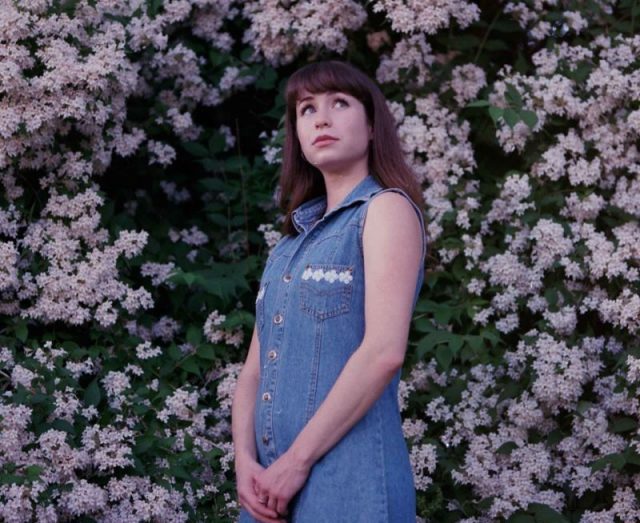 Cayley Thomas is a singer-songwriter and guitarist born and raised in Edmonton, Alberta, Canada and now based in Toronto. With a beguiling singing voice and talent for writing songs with arresting melodies and compelling, heartfelt lyrics, she’s been recording some very fine music for the past several years, beginning with her debut EP Ash Mountains in 2013. She followed up in 2016 with the excellent album Weird Love, then dropped an enchanting single “Midnight Hours” in November 2019. She’s now back with a great new single “Blue Jean Baby“, which along with “Midnight Hours” will be included on her forthcoming album How Else Can I Tell You?, due for release on May 1.

About the song, Thomas explains “‘Blue Jean Baby’ explores the pattern of feeling responsible for the emotions or actions of others at the expense of our own wellness. It’s like when you’re on an airplane and they tell you to put your oxygen mask on first before assisting other passengers. The accompanying video takes a sobering look at this. I think we can become preoccupied trying to do someone else’s work for them as a means to avoid our own self reflection.”

Musically, the song has a languid, doo wop beat, and features a rich mix of instruments that produce an interesting and pleasing soundscape for Thomas’ sublime vocals. She plays the subtle organ work on the track, and has the assistance of several other talented musicians, including Connor Snell (who plays her boyfriend in the video) and Josh Beatty on guitars, Ben Whiteley on the terrific bass, Robin Claxton on drums, James Hill on synth, and Naman Cale adding an enchanting musical element to the song with his marvelous vibraphone.  Josh Eygenraam and Aaron Parker provide the cool sci-fi sound effects that arrive at the end like an alien spaceship.

The brilliant video, which stars Thomas and curly-haired musician Connor Snell as her too-cute-for-his-own-good boyfriend, along with a number of her Edmonton friends, was also produced and directed by Thomas, and edited by Thomas and Ryan Gullen. It shows Thomas and Snell at a party with friends, where everyone’s drinking and having a good time – with a few of the guys, including Snell, drinking too much. The mood changes as Thomas and her girlfriends become sullen, staring coldly at their boyfriends who are getting increasingly drunk. Eventually, Snell passes out, and she now has to be the adult and carry him home and put him to bed. Disgusted, she goes out into the cold night and ponders her situation before going back inside. After the credits, she and Snell are shown sitting at the breakfast table the next morning, him trying to eat some breakfast while she quietly writes in her journal and avoids looking at him. Watch the video: