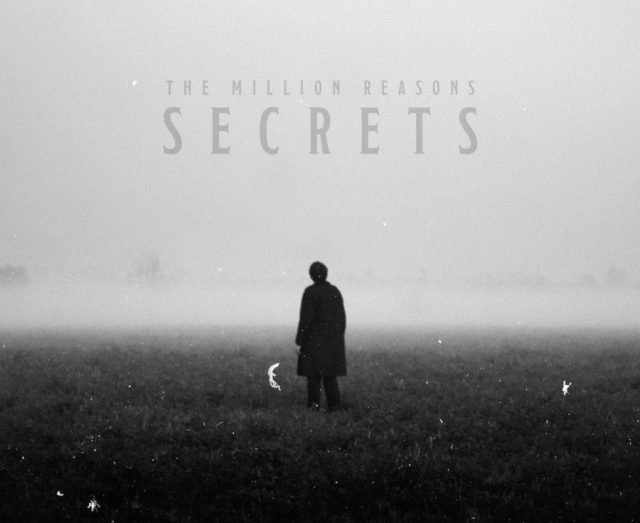 Chicago rock outfit The Million Reasons has been a favorite indie band of mine ever since I first heard their magnificent song “Dizzy” almost exactly one year ago today. I featured the song on this blog, and loved it so much it ended up at #10 on my list of Top 100 Songs of 2018. They followed “Dizzy” with another fantastic single “Battle of Sound” in early November 2018, along with a humorously charming video. (I reviewed both singles, which you can read by clicking on the links under “Related” at the bottom of this page.)

The guys now return with a brand new single “Secrets“, which finds them taking a somewhat darker tone than their previous songs. Drummer Colin Dill explained: “We wanted to surprise people with a darker, heavier song than expected. We are all a little angry about the current state of affairs and this song represents letting people into the frustration that can be hidden deep down.” Besides Dill, The Million Reasons is comprised of Scott Nadeau (lead vocals), Ken Ugel (guitar), Mike Nichols (guitar), and Jason Cillo (bass). They’re all phenomenal musicians, consistently delivering arresting melodies, killer riffs, tight rhythms and powerful vocals. “Secrets” was produced by guitarist Ken Ugel along with Adam Beck, and mixed by Ugel and mastered by Nick Stetina.

The song starts off with a somber, bluesy guitar riff, moody bass line and pounding drum beat as Scott sings the first verse with his beautiful, understated vocals:

It’s hard to keep the days in line
And it’s hard to tell the time
When your mind is far away from here
When the light begins to fall
And your thoughts begin to stall
What do you do to entertain yourself?

Suddenly, Scott’s vocals erupt into an angry wail as the music intensifies with a barrage of gnarly and distorted guitars, chugging bass and tumultuous drums. He passionately rails against the current socioeconomic conditions in America (and elsewhere) that keep a sizable percentage of the population stuck in financial limbo:

Welcome to the modern age
Where there’s no jobs, no decent wage
But that’s OK
You can have some debt for free
All the problems of today
(They) never seem to go away
And the light
Is still so far from me

The song ends on a bombastic note, driving home the frustration and anger the band feels about this subject with powerful ferocity. It’s another winning song from The Million Reasons, offering further evidence that they’re an immensely talented band who are skilled at producing exceptional music with compelling and relatable lyrics. I love these guys, and look forward to hearing more from them soon.

Catch The Million Reasons at one of these upcoming shows:

2 thoughts on “New Song of the Week: THE MILLION REASONS – “Secrets””