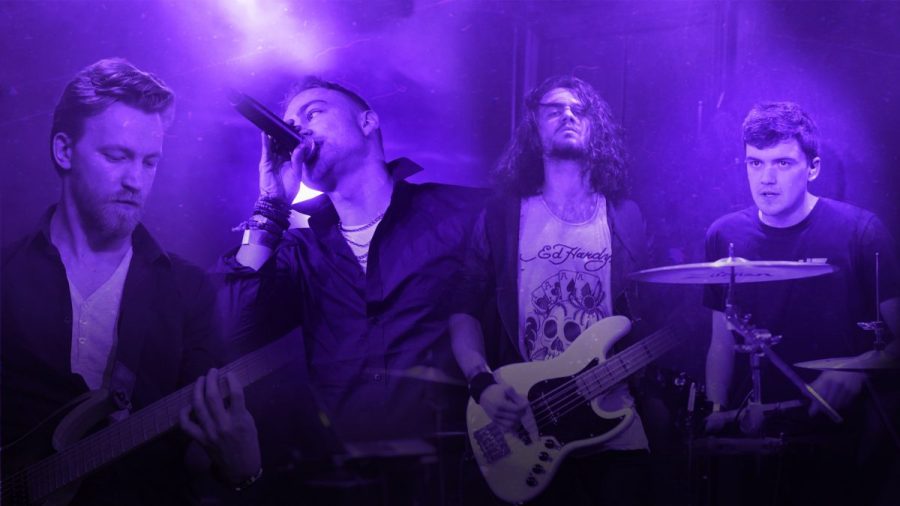 London-based electro-rock band Heist At Five is a wickedly talented and undeniably charismatic foursome with an international pedigree. Band front man and lead vocalist Oskar Abrahamsson is from Sweden, guitarist Jozef Veselsky is from Slovakia, bassist Marco “Fuzz” Paone hails from Italy, and drummer Josh Needham is from England. Together, they play an aggressive, innovative style of alternative rock that borders on experimental, with complex melodies, intricate chord progressions, spine-tingling electronic and guitar-heavy instrumentation, and electrifying vocals. And the icing on the cake is that every one of them is as gracious and kind as they are handsome.

Since first learning about them in early 2018, they’ve become one of my favorite British bands, and I’ve featured them a number of times on this blog, most recently in May 2019 when I reviewed their magnificent single “Falling With Style”. I loved it so much that it went all the way to #1 on my Weekly Top 30 and ranked #20 on my Top 100 Songs of 2019 list. Now, after keeping their fans eagerly awaiting new music from them for more than a year, Heist At Five are back with their new single “Friday Night“. Having been prevented from touring or performing live over the past six months due to the pandemic, the band has instead focused their creative energies into recording new music. They plan to release two more singles in the coming months, and hope to return to performing live again in 2021.

“Friday Night” is a bit of a departure from their typical edgy and harder experimental rock sound. Here, the band introduces an intoxicating Latin-flavored dance-pop element to their usual blend of guitar and electronic arrangements, along with the sultry croons of guest vocalist Francesca Confortini, to create a jubilant feel good summer anthem. Despite its more accessible, radio-friendly vibe, the song still features many of the stylistic elements and complex instrumentation that make their music so brilliant. I love the interplay between Jozef’s intricate and funky guitar riffs and that gorgeous swirling melodic synth that just grabs hold and sticks in our mind. Then there’s Marco’s distinctive bassline and Josh’s galloping drumbeats keeping the song’s sexy rhythmic grooves.

The song’s lyrics speak to celebrating good times and better days, and not wanting them to end. The band states that “the song focuses on the concept of not wanting to return to a state of normality when you are at your highest and everything is going your way.” Oskar is a great singer, and I love how his Swedish accent shines through in his fervent vocals as he sings about a women who lifts him up: “Dressed in gold/ She don’t need luck, she’s bringing her own/ When the light is gone look into my eyes and tell me I’m wrong/ When you’re aflame/ The morning sky is never the same/ We’ll bring you back to another fabulous Friday Night.” Francesca seductively croons her reassuring response: “Reset the sunset, let us start again/ To live a life that never ends/ Like gold in the black/ Gold in the black (like a Friday Night). ”

The song is so damn infectious, and I love it more with each listen!

The colorful psychedelic and surreal video was produced, directed and edited by Oskar. It features him and I’m guessing his sister Elin represented as dancing gold figures, as well as his mouth colored gold and blue singing the song (similar to the famous Rocky Horror Picture Show scene for the song “Science Fiction Double Feature”) set against a background of instruments and a kaleidoscope of patters and colors. It’s fantastic, so do watch and listen: