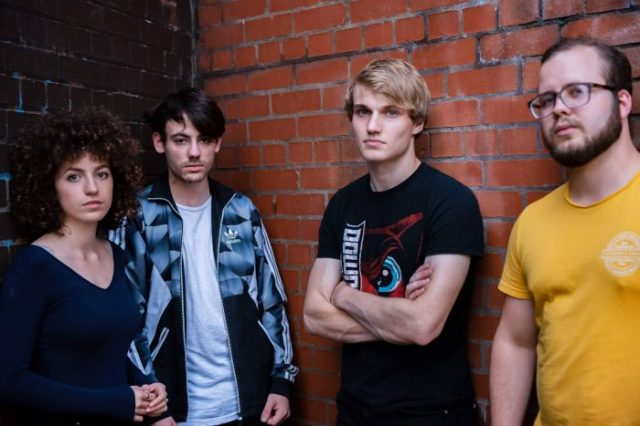 Bristol, England-based Mallavora are a young hard rock band on the rise. Their exciting, hard-driving sound is strongly influenced by progressive rock, groove and doom metal elements. They’ve released two terrific singles, beginning with “Clockwork Drunk” in 2017 and followed by “Daylight” in 2019, and have been featured on Planet Rock and BBC Introducing. 2019 also brought changes in their lineup with the addition of a new female vocalist, as well as the recording of four new songs that will be featured on their forthcoming Paradise EP, due out later this year. They plan to release all of the songs as singles over the coming months, the first of which is “Ego“, which drops today, March 29.

Mallavora’s new lineup consists of Larry Sobieraj (guitar), Ellis James (bass/vocals), Jessica Ansell (vocals) and Jack Pedersen (drums). About the new single “Ego”, they state that it’s about “autophobia”, generally defined as a phobia of isolation, specifically a dread of being alone or isolated, but oddly also having a morbid fear of being egotistical. The lyrics are about “confronting a tortured soul consumed by fear of itself.”

The song opens strong with a thunderous explosion of gnarly riffs, driving bass and pummeling drumbeats. What’s unusual is that the first lyrics we hear are actually the chorus, passionately sung by the dramatic vocal harmonies of Jessica and Ellis that remind me a bit of Evanescence:

The music calms down to a melodic interlude in the verses, highlighted by Larry’s gorgeous chiming guitar and Jessica and Ellis’ stunning vocal harmonies. Their vibrant singing voices are somewhat similar in tone, and sound really incredible together.

The music ramps up to a feverish crescendo in the final chorus as the band unleash their arsenal of sonic weaponry. Larry shreds his guitar to the breaking point as he lays down intense reverb-soaked riffs of distortion, while Ellis and Jack nearly blow out the speakers with their punishing bass and smashing drums. And, of course, Jessica and Ellis’ vocal harmonies are spine-tingling.

You did it to yourself
Forgot your mental health

“Ego” is a spectacular and beautifully-crafted song, and a big step forward for Mallavora. It’s great to see a band’s music and songwriting improve over time, and I’m confident they’ll have a bright and successful future.

Sadly, like so many other artists who’ve seen their tours canceled in the wake of the COVID-19 outbreak, Mallavora have had to postpone their April mini-tour as well. They hope to be able to go on tour later in the year. The artwork for “Ego”, as well as the EP and all upcoming singles was done by Caitlin Shephard.