I recently learned about British singer-songwriter Isaac Grinsdale when he reached out to me about his new EP Entertainment. I’m so glad he did, because it’s a terrific work. Inspired by such artists as Jimmy Eat World, Radiohead, Placebo, Frank Turner and American Football, the Leeds-based musician writes songs with thoughtful, compelling lyrics and unconventional, yet enthralling melodies. Isaac learned to play the guitar in his early teens, and got heavily into hard rock music, which led him to play in several rock and hardcore bands. Now a bit older and wiser, he’s transitioned into making more introspective, singer-songwriter acoustic-driven music, which has culminated in the release of his debut EP Entertainment.

About his new music direction, Isaac explains “I was really inspired by the ethos of the band Refused: That as musicians we should be playing at the edge of our ability, and pushing the boundaries of our music at all times. Otherwise, we’re not playing the kind of music we should be. It’s always stuck with me and frames how I write.”  Entertainment provides ample evidence that he was right to follow his instincts, as all four tracks are beautifully-crafted and deeply honest. A skilled multi-instrumentalist, Isaac played all the instruments himself, and even produced and mixed the recordings. 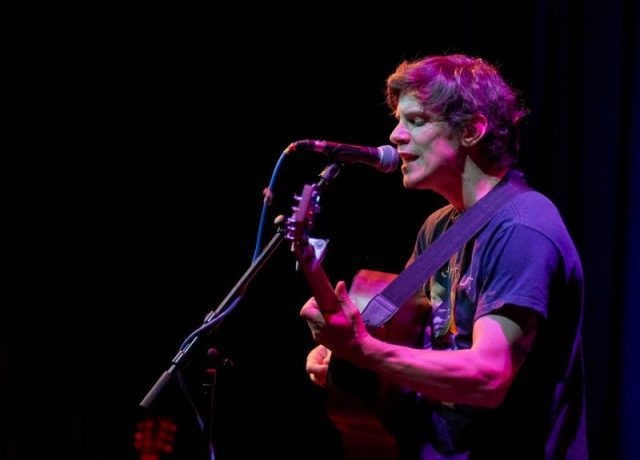 The first track “The Blind Leading the Blind” was also one of the first songs Isaac wrote and recorded. It’s a lovely tune, with a peppy guitar-driven melody that belies the withering lyrics that speak to the divisive rhetoric and false promises of our political leaders. In an interview with the webzine imPRESSED, Isaac stated that the song “is basically about growing up and realising the world we live in is fucked up – completely removed from what I was taught as a child.” His intricate strummed and chiming guitar work is exquisite, and all the supporting instruments are perfectly balanced, providing a strong, albeit understated soundscape that allows the guitars and Isaac’s clear, earnest vocals to shine.

They’re words that I have heard since a child
I hear them now: ‘I promise change!’
I once had no reason to doubt
Oh how strange it all seems looking back

They are words that I have heard since a child
I hear them now again
But here where the blind lead the blind
It will all fall on deaf ears, that’s all they’ll find

In the great deception, our language will strip us, and the world, of any sense of the plural. Now we’re left to speak in terms of ‘us’ and ‘them’

Inspired by a book by author Guy Debord: The Society of the Spectacle, the title track “Entertainment” is about how music, or any other art form for that matter, can provide a small counterbalance or escape to the depressing political bullshit touched on in the first track. Isaac based the cover art for his EP on the book’s cover art of the book, which he explained “captures perfectly the idea that we tend to look at the world through a distorted lens/framework.” The song has a rather interesting and unconventional, but pleasing melody that to my ears has a late-90s vibe reminiscent of artists of that period like Duncan Sheik and the Goo Goo Dolls.

“Nullius in Verba” is my favorite of the four tracks, not only because of it’s hauntingly beautiful melody and sublime instrumentation, but also the message of the song, which I strongly identify and agree with. The title is Latin for “not in any words” – essentially “take nobody’s word for it”, and is also the motto of the Royal Society, the British national academy of sciences. Isaac touched on the song’s meaning in his imPRESSED interview: “[It’s] about the importance of science, and rational thinking, slowly creating a more progressive and liberal culture from our draconian past. I had a very religious upbringing, but as a late teenager, I started to discover a lot more about how science, over time, has largely overturned our ideas from our past. One example that springs to mind is that human beings have evolved, rather than being created by a supreme being. For me, these are some of our greatest achievements.” Isaac urges us to view things through open eyes and an open mind: “Take a close look at all the terms we lay down. To look at this as objectively as we can. Just not in words, just not in opinion. No don’t you tell God what to do with his days.”

The first thing that came to my mind when hearing the fourth track “Speed of Film” was Joni Mitchell, arguably one of the greatest singer-songwriters of all time. Isaac’s unusual chord progressions and guitar notes call to mind many of Mitchell’s songs, and with his distinctive guitar-tapping technique, the song has a marvelous, fascinating sound. He explained that the song “is about how our memories make us into the people we are today. Lyrically, it’s packed with anecdotes of my friends and family: The great (and not so great) experiences we’ve had together.”

Entertainment is a wonderful debut effort by this skilled musician, who I admire not only for his impressive musical talents, but also for his unflinching stances on social and political issues. An interesting little side thing I noticed about the EP is that the four tracks are arranged such that each one is progressively longer than the one before. The first is 2:30 minutes long, while the last is 4:00 minutes. Isaac just finished recording his second record, an eight-track album titled Paper Crowns that he hopes to release in Spring of 2020, and I really look forward to hearing it. He’s supported acoustic greats such as Jon Gomm, Nick Harper and Beth Orton, and is now gearing up for a major UK Tour in support of his EP.