Derek Schmidt is an imaginative and talented queer composer, songwriter, and sound designer based in San Francisco, and he’s created one of the most uniquely wonderful and ambitious musical works I’ve ever come across. With over 15 years experience working and performing in the Bay Area in solo performances and as front man for three different acts – folk band All My Pretty Ones, queer electronic band Adonisaurus, and Oakland electronic band Partyline  – Derek has produced numerous albums across many genres, and has been a featured composer on independent film and performance art projects, including the feature length film Home And How To Break It. Most recently, on March 1st he released an opus concept album Major Arcana, a monumental 22-song interpretation of the trump cards (or major arcana) of the tarot deck.

The album was a five-year-long undertaking made possible through the San Francisco Arts Commission’s Individual Artist Grant, one of the city’s most prestigious awards for individual artists. Each song explores one of the 22 trump cards, from 0 The Fool to 21 The World (Universe). As Derek explains: “Each card is a meditation on the symbolism within that card, as well as my own personal relationship to the card. Utilizing samples as a form of sympathetic magic, a mixture of both personal and more transcendent lyric writing, acoustic and electronic arrangements in combination with lush harmonies, Major Arcana has become a set of exploratory rituals attempting to capture the wisdom of each card, for myself and for everyone.” 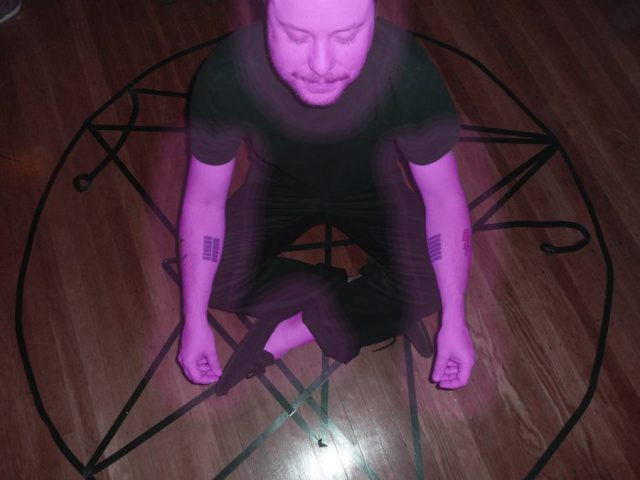 With a running time of one hour and 38 minutes, listening to this album is an immersive experience. If you allow yourself the freedom to do so, you can easily get lost in its enthralling soundscape of electronic dream pop magic. Musically, the album features a bold array of synthesizer sounds and textures, complemented by Derek’s enchanting ukelele. I’ve never fully appreciated just how beautiful music from a ukelele can be, but Derek draws forth sounds that are exquisite and utterly charming.

I generally tend to discuss or at least mention every track on my album reviews, but with 22 of them on Major Arcana, doing so would turn this review into a thesis. So, I’ll instead touch on some of what I consider to be highlights or my personal favorites. The album opens with “0 The Fool”, named for the first card of the tarot deck. One of my favorite tracks on the album, it perfectly showcases Derek’s skill at using synthesizers to create richly complex musical compositions. He employs all sorts of exotic and quirky synths, pulsating drumbeats and clicks, over which he layers his lovely strummed ukelele, and the result is an absolutely captivating song. Derek’s pleasing vocals have an earnest vulnerability as he sings: “Before I begin, and after I’m gone. That’s where I’ll be. That’s where I belong. Not afraid anymore, my arms open wide./ What is real, always was. And cannot be destroyed. And a fool for me. I’m a fool for you.”

Derek continues to explore each card in the tarot deck, artfully tailoring the synth sounds and song lyrics to the card’s themes.  Swirling spacey synths highlight “I The Magician” and “II The High Priestess”, with the latter featuring sharp thunderbolt-like sounds that conjure up images of spells being cast. The exuberant horn synths at the beginning of “IV The Emperor” symbolize the power and majesty of the position, and Derek’s ukelele riff later in the song is sublime.

On “VI The Lovers”, Derek uses sunny, whimsical synths as a backdrop for his lyrics extolling the joy of his love affair: “I love to love my lover so. To understand all that I don’t. It’s his fluency, won’t scare me. We laugh like kids, we find out things./ Where I am and where do you begin?” “IX The Hermit” sees him pondering loneliness and isolation: “It all comes down to a room of one’s own./ And all I need is a little more time. A few more hours in the day, and then I’ll turn to everything I’ve put aside. / Rearrange the furniture and open windows, give yourself some air.” And on the gorgeous “XI Lust”, he expresses ardent desire and passion through dramatic, soaring synths.

As would be expected, “XII The Hanged Man” is dark, with moody synths, a mournful backing chorus and a pensively strummed ukelele, accompanied by a funereal march drum roll. Derek sings of things from the point of view of a man about to be executed: “Hanged man sees it differently. Upside down, blood rushing to my head. Unfriendly faces become smiles instead. How many times have I been here before? Caught up, emotionless and always wanting more.” “XIII Death”, on the other hand, is not at all depressing, and in fact is one of the more beautiful songs on the album, with glittery, uplifting synths and Derek’s soaring ethereal vocals. He envisions life’s end as a new beginning: “A great unknown, behind the door. The ocean floor. A mystery yet to solve. The ones unmet. The tears unshed.”

A standout track is the mesmerizing and powerful “XIV Art”, for which Derek has created a fantastic video with the help of visual artist Video Hole (J Mason Buck).

Another of my favorites is “XVI The Tower”, one of the more musically complex tracks on Major Arcana. It’s a rather melancholy song, yet contains many beautiful and melodic passages that continually surprised and held my interest at it unfolded. And “XVII The Star” is pure delight, with its spacey sci-fi synths, sweeping melodies and lovely ukelele. “XVIII The Moon” is another highlight, and was the first song Derek wrote for the card cycle. In an interview with webzine Out Loud Culture!, he explained: “I was inspired by the meaning of the card, which usually involves ideas around intuition, illusion, and a general mystery. To me the moon is an ever present set of symbols like all of the cards that capture some aspect of the human condition. It’s a playful card but it can be bewildering, and I loved writing a song about that mystery. It was like a meditation.”

Closing the album is “XXI The Universe”, an appropriately epic six and a half-minute-long fantasia of glorious sound. Derek pulls out all the stops in creating a song of such incredible beauty and nuance that it takes my breath away. He uses a dazzling array of intricate synths ranging from glittery keyboards and shimmery strings to sharp industrial, sci-fi and atmospheric sound effects. All of this is of course accompanied by his beautifully strummed ukelele and richly-layered ethereal vocals. It’s one of the most spectacular tracks on the album, and a fitting conclusion to this magnificent and monumental work.