I had the pleasure of seeing my current favorite band twenty øne piløts in concert at the Scottrade Center in St. Louis on August 2, and my already high expectations were greatly exceeded. Not only are they amazing performers who put on a fantastically quirky show, but I also loved the two bands who opened for them.

I have to admit that I was not looking forward to having to sit through two opening acts I’d never heard of before seeing Tyler Joseph and Josh Dun play.  But the instant the first band – Chef’Special from Haarlem, The Netherlands – appeared on stage and began performing their exuberant new single “Amigo,” I was smitten.  They play a fun, energetic mix of hiphop, funk, reggae and rock guaranteed to have you on your feet.  I honestly felt disappointed when, after their third song, band front man Josh Nolet announced the fourth and last song of their set. I followed them on Twitter, listened to more of their songs and am now a fan.

After a brief intermission, the second opening band – MUTEMATH, a four-man band from New Orleans – took the stage and, once again, I was more than pleasantly surprised, not to mention shocked I had never heard of them, as they’ve been around for years and play totally awesome music!  Their lush, alternative synth/rock/jazz sound kept the audience – and me – at full attention and, as eager as I was to hear twenty øne piløts, I enjoyed every minute of their set. I was sorry they performed only six songs, including “Typical,” “Monuments,” and their gorgeous new single “Used To.”  We were all blown away by the powerful drum solos by band member Darren King, who attacked his drums with fierce abandon.  I’m now a big fan of MUTEMATH as well.

When the lights dimmed and Tyler and Josh appeared on stage, the audience leapt to their feet and went wild. The guys were dressed in their signature black and red suits, their faces covered by black balaclavas, and opened with a medley of “Heavydirtysoul” and “Migraine,” then segued into “Hometown.” Halfway into the song, crew members pulled a tarp over Tyler and, 30 seconds later, he reappeared in the upper stands and finished the song and tore off his balaclava. From video footage I’ve seen from other concerts on the tour, this stunt is repeated at most, if not all, shows. They continued playing songs from their three albums “Twenty One Pilots,” “Vessel” and “Blurryface,” as well as their latest single “Heathens.” 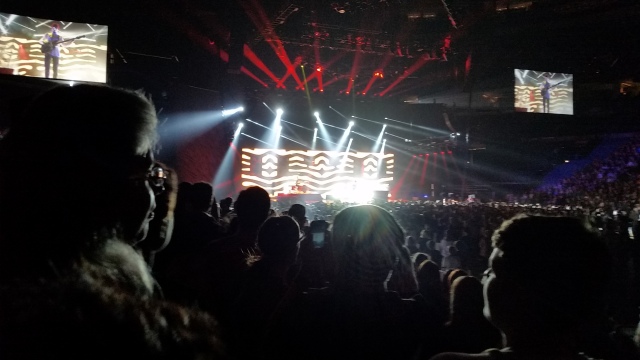 Afterwards, they quickly climbed down from that stage and returned to the main stage to continue their show.  Halfway through their set, Tyler pulled out his ukelele and led the audience in a singalong of Elvis Presley’s “Can’t Help Falling in Love,” then welcomed MUTEMATH and Chef’Special back to the stage, whereupon they all sang “Twist and Shout.” Next came performances of Celine Dion’s “My Heart Will Go On” and Justin Bieber’s “Love Yourself” (with Josh abandoning his drums and playing a respectable trumpet solo), ending with a rousing rendition of House of Pain’s “Jump Around.”  It’s always fun when artists and bands choose to perform songs outside their comfort zones.  Here’s a snippet of “Jump Around”:

Here’s their awesome performance of “Tear In My Heart.”  I couldn’t help but sing along and, unfortunately, my off-key vocals are audible at times. Yikes!

Toward the end of the show, Tyler climbed into a giant red inflated hamster ball that reminded me of the bubble that transported Glinda the Good Witch into Oz, and walked it out onto and over the audience while singing “Guns For Hands.” Again, this was another crowd-pleasing stunt performed at every show. As they played their last song, millions of pieces of red tissue paper confetti were shot into the air and quickly spread out over the arena. It was a dramatic climax to an incredible concert experience. 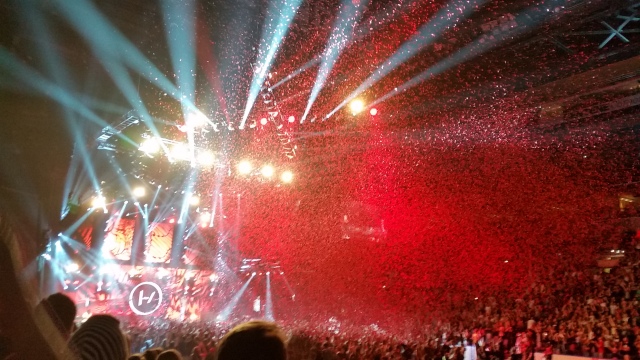