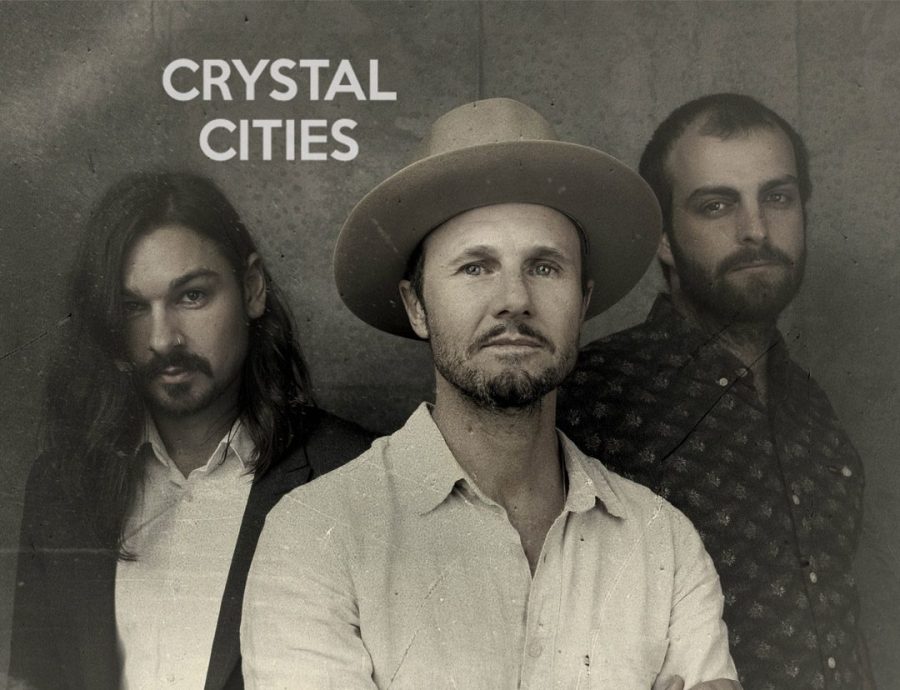 Ever since first hearing their stunning and critically-acclaimed debut EP Who’s Gonna Save Us Now in early 2017, I’ve been head over heels in love with the music of Sydney, Australia-based dream rock band Crystal Cities. With a sound they describe as “like Death Cab For Cutie had a War On Drugs with The Beatles” – all three bands I love – it’s no wonder I would love their beautiful music too. The supremely talented trio consists of Geoff Rana (vocals, guitars, keyboard), Jared King (bass, backing vocals) and Daniel Conte (drums, percussion).

In 2019, the guys had the opportunity to record their gorgeous debut album Under the Cold Light of the Moon at the famed Abbey Road Studios. The album featured eight stellar dream rock gems, most with lush orchestral arrangements and instrumentation. The dramatic title track “Under the Cold Light of the Moon” was inspired by the story of young North Korean girl Yeonmi Park. who bravely escaped North Korea in search of freedom. I reviewed the song, and loved it so much that it went to #1 on my Weekly Top 30, and ranked #10 on my Top 100 Songs of 2019 list. The album helped further cement their reputation as an outstanding group of exceptional songwriters and musicians. In recent weeks, they’ve posted back stories with lyrics for each of the album’s tracks on their Instagram page.

Now, Crystal Cities return with their latest single “Don’t Speak Too Soon“, which I’ve chosen as my New Song of the Week. The song, which drops today, August 21st, is the lead single from their forthcoming second album Hold Me Close Hold Me Tight. Both single and album see the band taking a different approach this time around, foregoing the fancy studio and producer and instead choosing to produce the album themselves.

With that in mind, at the beginning of this year, lead singer/guitarist and primary songwriter Geoff Rana decided to learn all the ins and outs of recording. With the help of free educational resources such as YouTube, he began putting his new-found knowledge to work as he tracked “Don’t Speak Too Soon” at his house in Sydney. It was definitely a trial and error experience, and the added responsibility and steep learning curve nearly overwhelmed him. “‘Don’t Speak Too Soon’ is my first attempt at being an engineer and producer. It was a lot more involved than just showing up to the studio to record my parts! I think more hours were spent reading and watching tutorials than actually recording. One of the biggest mental and technical hurdles I had to overcome was losing all my vocal takes and having to re-record them all over again.”

Well, I’d say that Rana did a masterful job, as “Don’t Speak Too Soon” turned out splendid. With the help of renowned L.A.-based mix engineer Paul Lani (David Bowie, Prince), the band has produced another winning single that retains their signature dream rock elements while delivering a more hard-hitting and edgier vibe. The frantic, guitar-driven melody is downright electrifying, and I think it’s the most exciting song Crystal Cities has done yet. Rana sets the airwaves ablaze with blistering riffs of jangly and gnarly guitars. I always thought he was a great guitarist, but here he blows me away with the sheer ferocity of his performance.

Jared King and Daniel Conte keep the powerful rhythm rampaging forward with their hard-driving bassline and smashing drumbeats. I especially love how Conte pounds out a single thumping blow to his drums at various breakpoints in the song to great effect. Then there’s Rana’s hauntingly beautiful vocals that are another highlight for me, as I love his singing voice. With a sense of sad resignation, he passionately laments that perhaps he overplayed his hand in love: “And it burns my eyes down through the bone. Why did I listen to love? Did I speak now too soon?“

I’ve loved every single one of Crystal Cities’ songs, and happily add “Don’t Speak Too Soon” to the list. Spectacular job guys!

8 thoughts on “New Song of the Week – CRYSTAL CITIES: “Don’t Speak Too Soon””