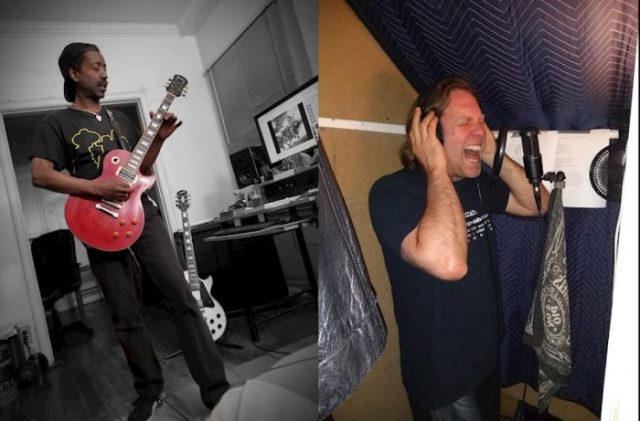 Face of Stone is a Los Angeles-based collaborative music project of songwriter, guitarist and producer Marc Palmer and singer, songwriter and multi-instrumentalist Brad Schecter. Each has years of professional experience both as solo artists and with other bands. Marc has been a musician for over 30 years, also serving as lead guitarist for venerable Grammy-nominated L.A. band The Busboys. Brad was previously in Scarred and Blue Embrace, and has also released music as a solo artist, including his acclaimed debut album Live Your Dreams in 2015 (read my review here). With Face of Stone, they combine Marc’s talent for writing hard-hitting guitar-driven melodies and bringing them to life with his prowess on the six-string, and Brad’s talent for penning compelling lyrics, vocal melodies and harmonies, as well as his strong vocals and musicianship. Their mission is to produce their own unique brand of metallic hard rock.

After years of hard work and a few setbacks along the way, Face of Stone has at last dropped their long-awaited EP Sex, Guns, Race and Money, released on the 4th of July via their label Black Grunge Records. The EP is not only hard-hitting and dark, but also socially and politically relevant, exploring subjects like political unrest, sexism, the struggles and mental abuse of love gone wrong, as well as larger themes of biblical significance, and the illusion and slow death of the American Dream.

Kicking off the EP is “Hurry Up and Wait“, an interesting track with a long, musically complex and dramatic intro that borders on progressive rock. After a minute or so, a darkly beautiful melody settles in, highlighted by Marc’s intricate layered guitars and a relentless onslaught of crashing cymbals. Brad’s powerful, resonant vocals express a sense of exasperation as he laments about what seems to be our overall lack of control over the external forces that affect our lives: “Shiny objects don’t just mesmerize. more times they often lie. Too bad it doesn’t matter what we give or if we try. We find out what’s important, hopefully before we die. Through all the pain and sorrow, hurry up and wait.” I especially like the soaring vocal harmonies in the final chorus.

Continuing on a similar theme, “United Shutdown (Sex, Guns, Race and Money)” is a scathing attack on the political and economic forces that have gained power by dividing us and force-feeding us an endless stream of lies and hate. The song is kind of a metal rock answer to Public Enemy’s classic “Fight the Power”, with lyrics strongly advocating us to take back the power: “See what pawns we have become. Surrendered our power, must be undone. Only you can seek the truth. Fight back now or forever be used.” Once again, Marc dazzles us with blistering guitar work as Brad’s commanding impassioned vocals drive home the urgency of the lyrics.

“Dark Rocker” is a hard-driving kiss-off song to an old flame he’s fallen out of love with. Brad stated that he wanted the choruses to sound like a Trump tweet: “But something happened to you, I guess you just got old. You never left me, but you’re a dark rocker, not anymore. Sad!” Musically, the song features a frantic, pummeling rhythm that hits a sweet spot between punk, metal and rock’n’roll. Marc’s reverb-heavy distorted guitars are fantastic, and Brad’s colorful, spirited vocals are terrific as always.

“Red Moon Sky” was the very first single released by Face of Stone back in April 2018 and it’s a belter. (You can read my review here.) The song blasts open with a barrage of raging riffs, chugging bass and pummeling drums, punctuated by tasty bits of distorted guitar that give the song added punch. Marc’s electrifying riff in the bridge is fire, and Brad’s raw, impassioned vocals bring chills as he snarls the lyrics that touch on the thin line between love and hate that can occur in a tempestuous relationship plagued by bad feelings and distrust: “Not one to deny what you need to feel fulfilled. Just not the one to do it. You’re not someone who is capable of change. No matter what, you stay the same.” The song spent more than four months on my Weekly Top 30 over the summer of 2018, and ended up at #50 on my Top 100 Songs of 2018 list.

The gorgeous “Through the Wildnerness” touches on the story of the Jews’ escape from Egypt. At first glance, it seems like a rather odd song choice in the EPs lineup, but the more I thought about it, I believe it fits in with the overall theme of seeking freedom from oppression. It’s a grandiose song of near-epic scale, with dramatic instrumentation highlighted by a haunting jangly guitar riff, and accompanied by a thunderous mix of chugging gnarly and distorted guitars, heavy buzzing bass and explosive percussion that make for an electrifying listen. Brad’s plaintive vocals are chilling as he sings “Hand of god, delivered us. He will guide the way home today. He brought us out of Pharoah’s land. Destroyed him with his hand.”

Sex, Guns, Race and Money is a great little EP that nicely showcases the immense talents of the two musicians of Face of Stone. There’s a lot of power and intensity packed into the EPs 20-minute run time, and if you like great guitar work and expressive vocals combined with exquisite songwriting, you will enjoy this record.