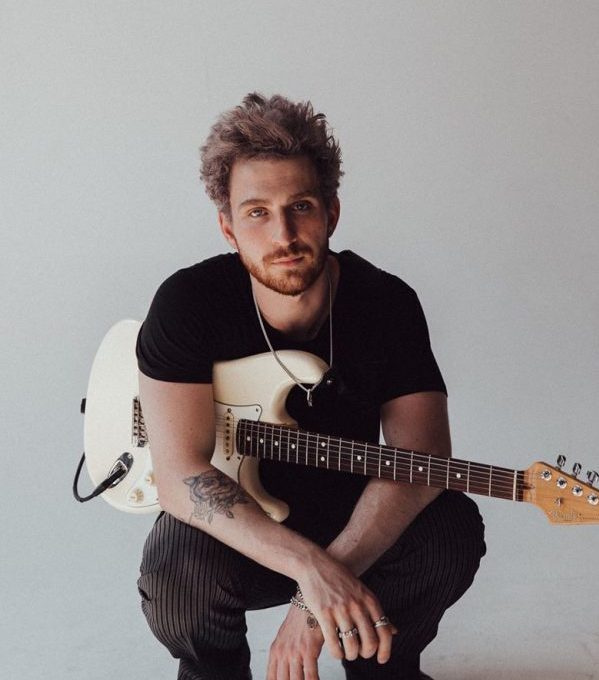 Amidst all the bad news of late regarding rogue viruses and collapsing financial markets, one of the few bright spots has been the release of the new album Pink by singer-songwriter and guitarist extraordinaire Two Feet. Released via Republic Records on March 13th, I’ve had Pink on repeat for the past several days, and can emphatically state that it’s the best album of 2020 so far. I’m writing this review with a bit of trepidation, as I hope to do justice to this magnificent work.

For those unfamiliar with Two Feet, he’s the musical alter-ego of New York City-based singer, songwriter, multi-instrumentalist and producer Zachary William “Bill” Dess, who I think is one of the finest guitarists around today. His songs are slow burns, characterized by soulful, smoldering vocals, intense, bluesy riffs, cool jazz and hip-hop undertones, and booming synth bass grooves that cut straight to our cores. He also writes brutally honest and compelling lyrics that resonate with many of us. As beautifully described in his Google Play bio, “his songs are the soundtrack for staying up late into the night, aching to figure out how to remedy heartbreak, anxiety, and uncertainty.”

Two Feet first gained notoriety in 2016 with the release of his single “Go Fuck Yourself”, which quickly went viral on Soundcloud. He soon followed up with a couple of EPs (the cleverly titled First Steps and Momentum), then hit the big time in the summer of 2018 with his breakthrough hit “I Feel Like I’m Drowning”. The gorgeous song went to #1 on the Billboard Alternative chart, and ended up at #18 on my list of 100 Best Songs of the Decade. That October, he released his extended EP A 20 Something Fuck, which featured “I Feel Like I’m Drowning” and the beautiful track “Hurt People”, a deeply personal and haunting duet with Madison Love.

I had the pleasure of seeing him perform in Los Angeles in November 2018 (you can read my review here). He spent the first few months of 2019 touring with Panic! At the Disco, which exposed him to a whole new audience who hadn’t heard of him previously. I relished reading all the tweets from people who’d gone to see PATD and came away enthusiastic new fans of Two Feet. In fact, I have to say that his are some of the most fiercely loyal and devoted fans I’ve seen for any artist. He’s made a point of being open and honest with his fans and followers about his own personal struggles with depression and anxiety, and engages with them fairly regularly on Twitter. That’s pretty rare for artists once they become well-known, so it shocked the hell out of me a few months ago when he tweeted words of encouragement to me in response to my tweet about feeling depressed and overwhelmed. Needless to say, I was deeply touched, and it made me love him even more. 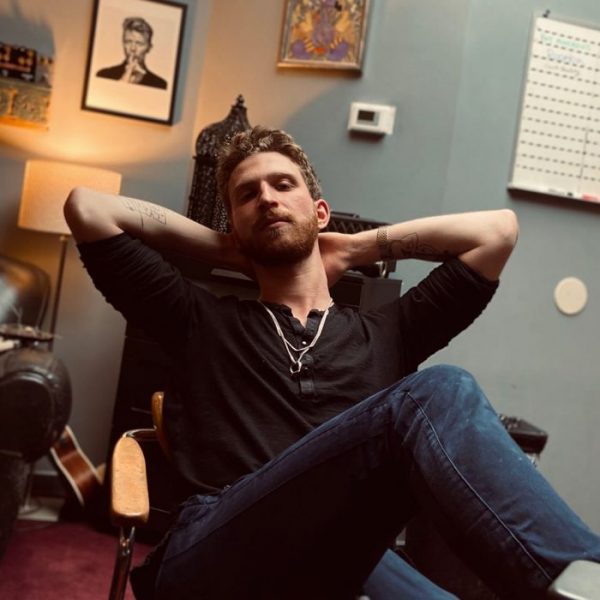 He started writing songs for Pink in the fall of 2018, some of them influenced by events happening in his life. In September 2019, he began teasing his fans by dropping a series of tracks in advance of Pink’s release, beginning with “Lost the Game” – though it falls squarely in the center of the track listing. In a heartfelt statement, he expresses his hope that the album will touch us in a meaningful way, also recommending that we listen to it in its entirety, from beginning to end: “With the way the world is going right now, I hope listening to it gives you some peace, or makes you cry, or makes you feel sexy, or makes you happy, or briefly brings you to a different world. As long as you feel SOMETHING, I’m good with that. I worked hard on the track list. This isn’t an album of singles, it’s a ‘thing-in-itself’. Please listen in order. Front to back.”

Two Feet records and performs his music with the assistance of his longtime keyboardist/drummer Geoffrey Hufford (aka Huff), who is adept at delivering the deep, floor-rattling synthesized bass that gives his music such incredible depth. This can clearly be heard on the minute-long opening track “Intro“, with chest-thumping beats surrounded by swirling psychedelic synths and Two Feet’s bluesy guitar notes. Up next is the title track “Pink“, a song that beautifully encapsulates the album’s overall theme. He states “A lot of the songs deal with the passage of time and how you interpret it.”, a topic nicely articulated by the song’s introspective lyrics: “25 don’t feel the same way… / And I keep getting older / My mind is getting colder / The things that all once mattered, I know for sure won’t last.” His intricate guitar work is stunning, and even if you didn’t listen to another track on this album, you’d still have to concede that he’s a phenomenal guitarist.

For this album, Two Feet incorporates a wider range of elements into his songs than ever before, resulting in a more diverse and exciting overall sound. “BBY” is a good example of this, with its bouncy EDM beat that builds as the song progresses. Once again, his guitar work is fantastic, and I love the sweeping spooky synths and his seductive, breathy vocals. “Call Me, I Still Love You” is a gorgeous and bluesy instrumental interlude that provides a perfect segue to “You?“, a dark scorching-hot song about coming to the realization that the relationship was always one-sided: “So tell me the truth was it me then, who needed you?” I realize I’m sounding like a broken record, but once again the intricate guitar work is breathtaking, and I love how the music alternates from a sultry vibe in the verses to a bombastic explosion of fiery riffs and earth-shattering percussion in the choruses. “You?” is perfection from start to finish, and easily my favorite track on the album. It spent five weeks at #1 on my Weekly Top 30 from late December through late January.

Two Feet had an official video made for the song, but I like this live studio performance better, as it features a killer extended guitar solo that really showcases his fearsome guitar skills. You can hear the original version on the Soundcloud playlist at the end of this post.

On the moody, synth-driven “44 Lies“, he seems to touch on how we delude ourselves in order to help us fit in, feel accepted, feel ‘normal’: “44 lies / Told in your 20s / Keep you alive / Make you feel empty / All of the guys / Wearing the same shoes / Telling me things / Praying they ain’t true.” Figuratively speaking, the melancholy “Lost the Game” represents the emotional low point on the album. The lyrics speak of coming to the painful realization that the relationship is over for good, with no hope of reconciliation: “And what can I do, I do, I do I know it’s over / Cause I lost the game, I can’t get lower / Caused you pain, it’s taking over.” With all hope now gone, “Grey” sees him rationalizing his fate and accepting that he must move on. Likewise, his mood has evolved from black into something a little less bleak – a shade of grey: “Before I fall away I feel like I should say I’ve always liked your eyes / But now I’ve got to leave / It’s okay It’s alright / I feel good I feel fine.” Musically, the song is dominated by a deep, buzzing bassline set to a mesmerizing hip hop beat, over which Two Feet serves up some of his signature bluesy riffs.

The smoldering track “Maria” was apparently a last-minute addition to the album. Overflowing with menacing synths, throbbing beats and haunting choruses, it’s one of my favorite tracks. Concurrent with the album release, Two Feet released a dark and sexy video for the song, his first to actually tell a story to fit the narrative of the lyrics. It opens with an ominous image of just his eyes, then shows him having a drink in a rather seedy bar, along with an assortment of shady-looking characters. Maria saunters into the bar, orders a beer and sensually dances while all the men gaze at her longingly. She eventually goes home with one of the guys as Two Feet laments “Oh oh oh while you’re getting in his bed, I’m alone without a friend tonight / Maria Maria, I tell ya I need ya..” Maria and the guy start to have sex, and she ties him to the bed. Sadly, he doesn’t get lucky, as she ends up stealing his valuables, even ripping his gold chain from his neck and leaving him tied up. We’re left wondering whether she’s just a gold digger who breaks men’s hearts (and wallets), or if she’s working in cahoots with the guy portrayed by Two Feet.

After the intensity of “Maria”, we need a bit of relief, which he nicely delivers with the captivating and soulful instrumental “Felt like playing guitar and not singing part 2“. The song is a nod to a similarly-titled track that appeared on A 20 Something Fuck. “I Can’t Relate” is a lovely, bittersweet tune that sees him revisiting what went wrong in the relationship: “The winter wind when we first fell in love was cold / You touched my face, my mind began to run, yeah / But you don’t care now, you tell me its all set and done / I’m numb ’cause I can’t relate / Oh, I can’t relate to you.”

Another favorite of mine is “We Will Be Alright“, a poignant and hopeful song reassuring a loved one that your love will endure til the end, and all will be well: “And I, I want you by my side / And I, I need you ’til I die / And when that day comes you will be alright / Because we will love through time.“ The lyrics could represent either a coming full-circle back to the beginning, or else the birth of an entirely new relationship, but either way, it ends things on a more upbeat and positive note. Musically, it’s more low-key and stripped back than most of his songs, with the only sounds coming from his gently strummed guitar and comforting vocals.

The album closes with “Pink Reprise“, a bewitching instrumental track that revisits and continues upon the haunting melody first introduced with “Pink”. It serves as a fitting closure for the album, and a vivid reminder of Two Feet’s spectacular guitar-playing skills. Properly listening to Pink is an immersive experience that needs to be done in a single sitting for maximum enjoyment, and to fully appreciate it’s immense power and beauty. I don’t normally grade albums, but I would give this an unequivocal 10/10.

Two Feet is donating $1 from every sale of Pink to the Siegel Rare Neuroimmune Association, which benefits those diagnosed with rare neuroimmune disorders like his own sister, GG.