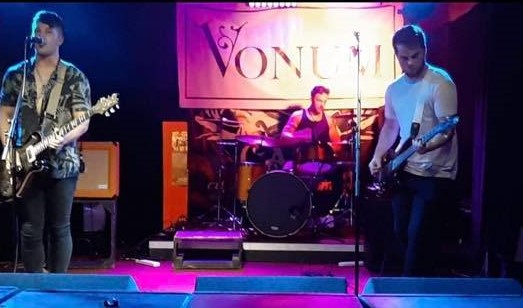 Vonum are a British alternative blues rock band based in Manchester, England. Formed more than eight years ago while in their early teens, the trio includes Dominic Nicholls (guitar & lead vocals), Ben Stokes (drums) and Jordan North (bass). Lifelong friends who share a passion for music, the guys have known each other since they were four years old.  Since their formation, Vonum has had several fourth members who’ve come and gone and, earlier this year, the guys decided that they have better chemistry as a three-piece, so will remain a trio going forward.

A young VONUM playing their first gig in 2011

Drawing influences from some of their favorite bands like Kaleo, Black Stone Cherry, Shinedown, Alter Bridge and Muse, Vonum play some exceptional bluesy, guitar-driven rock. Their progressive, unconventional melodies, smart lyrics, skilled musicianship, and Dominic’s deep, raw vocal style give their music a maturity and depth that’s quite impressive given their relatively young ages. I’d guess it’s partly attributable no doubt to years spent perfecting their craft and growing into seasoned, albeit still young, musicians. In June (2019), they released their debut EP Dances in the Dark, featuring four tracks. The guys wrote and performed the songs, and the EP was produced by Ed Truby.

“Reach Out” opens the EP with a moody little riff that immediately grabs my attention, then once the rhythm section kicks in with a deep, bluesy bassline and tumultuous drums, I’m hooked. Dom lays down gnarly riffs while plaintively crooning “She’s a grape to my red wine. She’s my one true life line.” As the song progresses, the guys continue delivering bluesy grooves, punctuated by a blistering guitar solo in the bridge. They keep the bluesy vibes rolling on “Double D-Light“, a lusty, hard-rocking tune about sexual attraction. Dom fervently sings: “It’s getting a little frisky. The air’s so tight. The days are getting stronger. The heat’s a-lasting longer. Now don’t put me on, you’re double d-light.” Once again, he lets loose with a brief but fiery guitar solo in the bridge.

“Angel Queen Dancer” is a standout track that really showcases the guys’ great songwriting and musicianship skills. They weave together a compelling story line with a mesmerizing melody, drawing us in and holding our attention for the entire five-minute run time. Dom’s intricate guitar work is nicely complimented by Ben and Jordan’s tight, bluesy rhythms, making for a dynamic and incredibly satisfying track. Dom sounds better than ever as he ardently sings in his raspy, almost sultry voice of feeling besotted by a woman: “It’s her that I adore. She’s a hell of a mover. How do I say ‘scuse me miss, let me get out your way’. She’s an angel queen dancer. She knows just what I mean.” His guitar solo in the bridge is fire, and the piano keys in the final chorus are a nice touch.

The final track “When” is a darker, more intense song. It starts off calmly with Jordan’s deep bass riff, then a delicate synth, guitar and a somber drumbeat enter as Dom laments about the internal demons tormenting him: “When, when, when, when will it stop? The devil inside don’t know when to hide. Oh when, when, when, when will it stop? The thoughts aren’t me, and my mind ain’t free. / Dark cloud knocking at my door. Louder, louder, it’s hard to ignore.” The music eventually ramps up with chugging riffs of gnarly guitars, buzzing bass and pounding drums that continue through to the end for a dramatic finish.

Dances in the Dark is an excellent little EP, and an impressive debut for these three talented lads. All four tracks are superb, and I only wish there were more of them! If you like well-crafted blues rock and great guitar work, you’ll enjoy this EP. I hope we’ll be hearing new music from Vonum very soon.