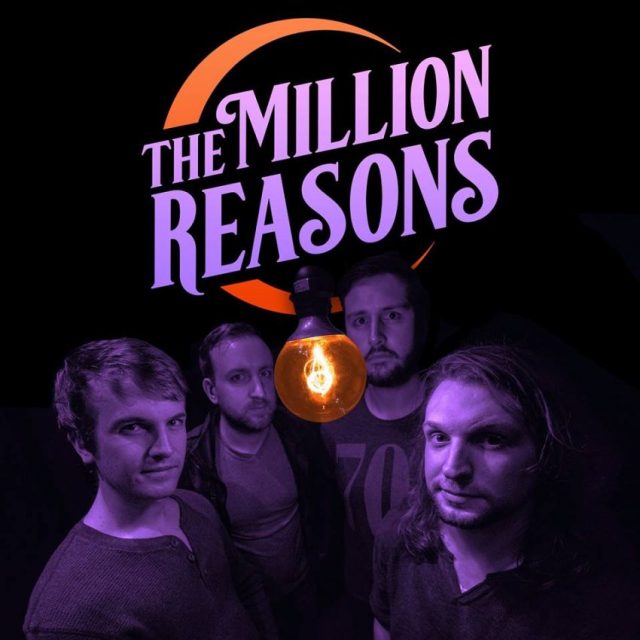 I think everyone who loves music will agree that one of life’s supreme pleasures is hearing a song for the first time and having it move us in some powerful way – which could be to bring chills, tears, joy, laughter or make us want to dance with abandon. Chills were what I felt when I first listened to the new single “Dizzy” from Chicago rock band The Million Reasons, which dropped July 13. Wow, what a powerful and gorgeous song it is, and I was so moved that I had to feature it on this blog.

The Million Reasons is comprised of Scott Nadeau (vocals and guitar), Ken Ugel (guitar), Mike Nichols (guitar) and Colin Dill (drums). Their dynamic sound – which they refer to as “rock and roll for summer nights and long rides” – draws influence from such legendary bands as Led Zeppelin, Queen, Thin Lizzy, Aerosmith, The Beatles, The Who, The Rolling Stones, Lynyrd Skynyrd, Foreigner and Rush. The guys released their debut EP The Runaround in 2017, featuring six outstanding hard-hitting tracks that I highly recommend my readers check out. But with “Dizzy,” they’ve really struck sonic gold.

The track opens with an enthralling guitar riff that immediately pulls us in with the promise that something really beautiful is about to unfold. As the song progresses and the music expands with added layers of intricate guitars and percussion into a soaring anthem, we’re not disappointed. The guitar work is simply amazing, and by the time the chorus arrives with jaw-dropping riffs of screaming guitars and thunderous drums, we’re left gasping for breath.

With his raw, earnest vocals, Nadeau passionately sings about a relationship in which both are blinded by an obsessive desire for one another:

“Dizzy” is a magnificent song from start to finish, and even at 5:41 minutes in length, it seems over far too quickly. I love it, and I love this band! I also love the beautiful video that was directed and edited by Stephanie Battista. I usually prefer videos that show the band or artist performing the song, instead of an acted-out story that sometimes has little to do with the actual song.

Catch The Million Reasons at one of these upcoming shows: