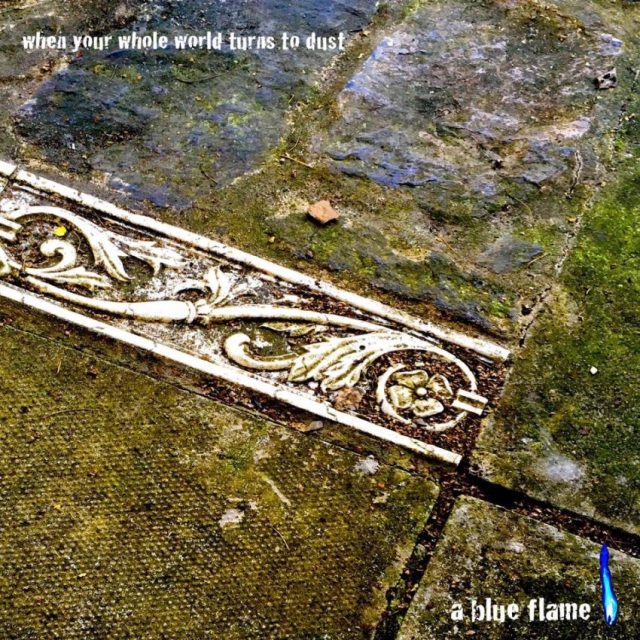 British singer/songwriter Richard Stone – who goes by the artistic name A Blue Flame –tells compelling stories about life, love, faith, loss and heartbreak through poetic, heartfelt lyrics and sublime melodies. And though he’s not as concerned about the music or sound of his songs as he is the lyrics, I think they sound just right. His songs reflect an eclectic range of styles from doo-wop and old-school pop to easy listening ballads, folk and rock. Plus, his smooth, clear vocals are pleasing to the ear and perfectly suit his thoughtful lyrics.

Following up on his phenomenal 2016 album What We’ve Become is All That Now Remains, which I reviewed, A Blue Flame dropped When Your Whole World Turns to Dust at the end of September 2017. (he does seem to like long album titles!) He takes a somewhat darker tone on this album; many of the song lyrics are sad or bittersweet, speaking to failed relationships, regret, or disillusionment with the state of things. And yet they’re lovely to listen to and never depressing, offering glimmers of optimism and hope.

He writes all his songs and plays guitar on all the tracks. He arranges them with assistance from Adam Ellis, who co-produces and also plays guitar.  Other session musicians add their skills to the mix as needed, including Damon Claridge on drums, Andy Robertson on bass and keyboards, and Tony Robinson on keyboards and horns. 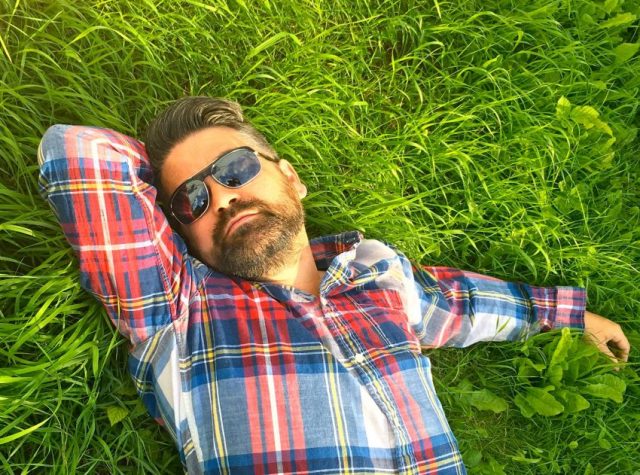 “Back to the Stars” kicks things off with a languid tempo that feels rather like a sad slow dance, as a somber trumpet takes center stage. Soft tinkling of piano keys, a lightly strummed acoustic guitar and gentle snare drums complete the music. With an air of melancholy in his voice, A Blue Flame croons a message of hope and redemption: “When your whole world turns to dust. And all that you’ve known lies shattered and torn in undiluted sorrow. Look at the sky up above and know that you’re loved. Look up and know that you’re loved. And we’ll go back to the stars.”

The sad theme continues with “We Feel Like We Feel,” a beautiful but wistful song with layers of twangy strummed guitars, organ and a soft snare drum. The poignant lyrics speak to a relationship in which the feelings that once drew them together have drained away, leaving them feeling emotionally empty:  “Fleeting bittersweet memory. We found things that you can’t see. Every day we wake up wondering how the day starts. All we can feel is the cold of the steel in our hearts.” “Don’t Wait” is an uptempo pop tune with jangly guitar, piano and smooth trumpet.  A Blue Flame urges us to not waste any more time clinging to fear, self-doubt and regret, and to just “Strip off, dive in and swim.”

One of my favorites is “21st Century Blues,” a catchy song with a hook that would make Burt Bacharach proud. Tony Robinson’s bold trumpet has a starring role, with keyboards, piano and guitar adding to the great instrumental mix. The lively rock guitar riff in the bridge gives the track an extra jolt of energy.

“The Future’s a Mystery” is a lovely little song about not worrying about what the future may bring, and just enjoying what we have now: “The future’s a mystery, let’s get on with living today.” A slow doo-wop beat and a beguiling trumpet are defining elements of the hopeful “A Better Way.” A Blue Flame advocates a solution for getting out of our funk: “All we need are easy days to chase the blues away. Let’s find a better way.”

One of the prettiest but also saddest tracks is “The Words Wouldn’t Form” a bittersweet song about feeling heartbroken over someone who’s left you for another. A Blue Flame’s doleful vocals convey a deep sadness as he sings: “I don’t know why I could not say goodbye. Darling I don’t know why the words wouldn’t form.” Musically the song features a gentle strummed guitar, lovely flute and xylophone, and the backing chorus is beautiful. A celtic-sounding flute and acoustic guitar are a sweet backdrop on “All We Need to Know.” The lyrics speak to the honest realization that a relationship was not going to survive. With a hint of cynicism, he admonishes us not to take life so seriously on the peppy “Everything’ s a Lie.” “There’s no need to cry when everything’s a lie. Nothing makes sense anymore. Show me the door.”

A Blue Flame rocks out on the next two tracks. “Empty Head” is a great, hard-hitting song in which he concludes that ignorance is bliss: “Nothing springs to mind. Empty head is here again.” The edgy “See What Tomorrow Brings” is terrific, incorporating touches of psychedelia and punk, and is a song David Bowie could have done. It features heavy guitars, bass and drums, and the distorted guitar riff at the end is awesome. It’s another of my favorites on the album.

The album closes on an optimistic note with “Love Will Set Us Free,” a beguiling song with a similar smooth, slow tempo as the opening track. The piano work is especially sublime, as are A Blue Flame’s vocals and the backing chorus. It’s a fitting end to a unique and wonderful album. His lyrics, music and vocals meld together perfectly, and the album’s production values and music arrangements are outstanding on every level. It all makes for a really beautiful and highly satisfying listen.

2 thoughts on “A BLUE FLAME – Album Review: “When Your Whole World Turns to Dust””