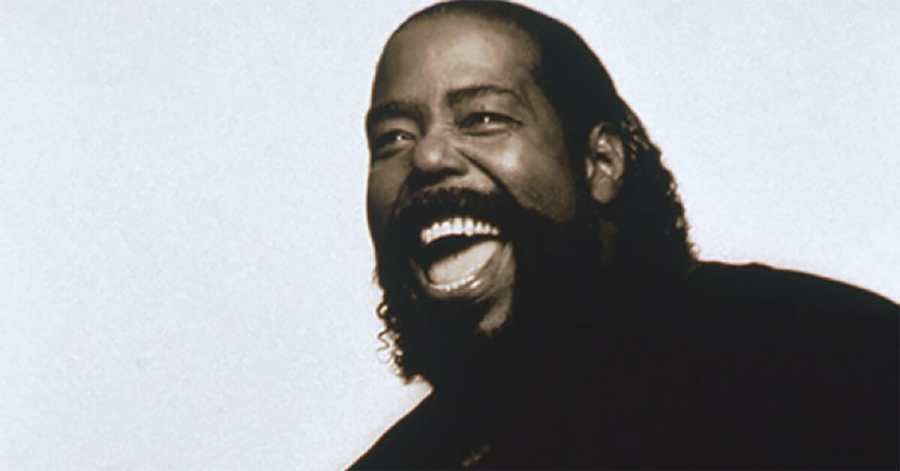 I was a big fan of soul singer Barry White (born Barry Eugene Carter in September 1944), and love many of his hit songs. But my favorite of them all is “Can’t Get Enough of Your Love, Babe“. Throughout his long career, which lasted much of his adult life from the 1960s until the late 1990s, White was a singer, songwriter, composer, musician and producer. Known for his distinctive bass-baritone voice and sensual singing style, his biggest success came during the 1970s as both a solo artist and as producer/conductor of The Love Unlimited Orchestra, when he scored a number of top 10 soul, funk and disco hits.

White was born in Galveston, Texas, but grew up in South Central Los Angeles. His parents never married, so his mother gave him her last name at birth, but he later assumed his father’s surname. He was the older of two boys. White grew up listening to his mother’s classical music collection and taught himself to play the piano at a young age. His voice deepened suddenly when he was 14. He later recalled to music writer Larry Katz that his mother cried at the time “because she knew her baby boy had become a man.” Sadly, both he and his brother got involved with street gangs in their early teens, and his brother Darryl was tragically murdered in a fight with a rival gang, whereas White spent four months in jail for theft charges. After he was released, he cleaned up his act and began singing with groups and working for various small independent music labels in the L.A. area.

He got his big break in 1972 when he began producing music for girl group Love Unlimited, with whom he had a fairly sizable hit “Walkin’ in the Rain with the One I Love”. The following year, he created The Love Unlimited Orchestra, a 40-piece orchestral group that would perform the background music for Love Unlimited as well as his own songs. With Love Unlimited Orchestra, he released the gorgeous instrumental piece “Love’s Theme” in late 1973, which went to #1 in January 1974 on the Billboard Hot 100. White’s first chart hit as a solo artist was “I’m Gonna Love You Just a Little More Baby” in 1973, followed later that year by “Never, Never Gonna Give Ya Up”, both of which reached the top 10. In late June, 1974, he released “Can’t Get Enough of Your Love, Babe” as the lead single from his album Can’t Get Enough. The song ultimately reached #1 on both the Hot 100 and R&B charts.

It’s a beautiful R&B song with soulful guitar and percussion, backed by sweeping orchestration, the highlights of which are the exuberant brass and lush strings. All serve to create a swirling romantic soundscape for White’s deep, velvety vocals as he fervently professes the depths of his love and devotion to his beloved:

Girl, if only I could make you see
And make you understand
Girl, your love for me is all I need
And more than I can stand
Oh well, babe

How can I explain all the things I feel?
You’ve given me so much
Girl, you’re so unreal
Still I keep loving you
More and more each time
Girl, what am I gonna do
Because you blow my mind