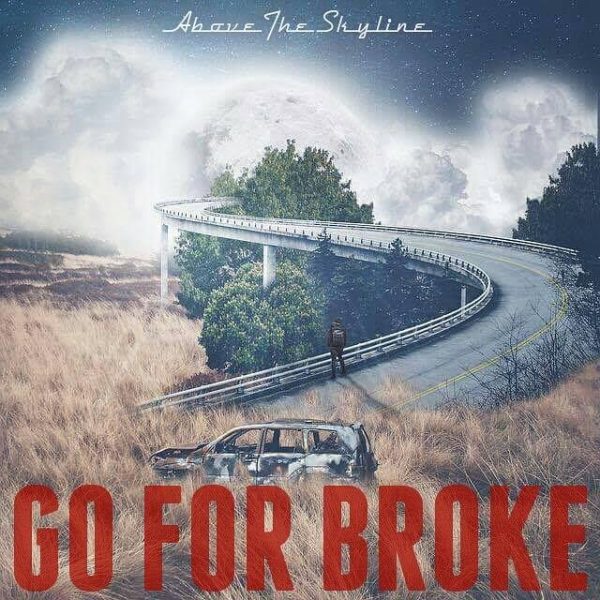 South Florida has a vibrant music scene, thanks to a diverse, multi-cultural population with a tremendous mix of influences. Several months ago I wrote a feature on the Miami-based indie rock band SunGhosts, and now I shine a spotlight on the young, incredibly talented five member collective Above The Skyline. They play an edgy style of alternative pop/rock with touches of R&B, funk and punk. Following up on their acclaimed 2015 EP A Different Breed, the young band (all are in their early 20’s) have released an ambitious new album Go For Broke.

Their bio states “the band prides itself on being different but yet producing a sound that everyone can love and listen to with ease.” That’s certainly the case, as Go For Broke is chock-full of melodic tunes that feature catchy hooks, complex, multi-layered guitar riffs, dynamic percussion and really fine vocals.  Making this great music are Chloe Santiago on drums, Eric Green on guitar, Zach Wood on keyboards and vocals, Alec Enriquez on bass, and Peach Martine on vocals.  Chloe and Eric, who’ve known each other since they were kids and have been playing together for more than 12 years, formed Above The Skyline in 2013. Within a year, Zach, Alec and Peach joined the band, completing the current lineup.

Despite their youth, all have extensive musical backgrounds. Eric began studying music history and theory at the age of five, along with taking piano lessons, and at nine he began studying guitar. He met Chloe while taking lessons at Music Depot, and eventually was part of a couple of hardcore metal bands. Chloe started playing drums at seven, and played in marching bands in middle and high school. Zach is grateful his mother forced him to take piano lessons, which eventually led him to learn saxophone and percussion as well. He also played in middle and high school marching bands. Alec began studying guitar in high school, and eventually fell in love with the bass. Peach, who not only sings, but is also a songwriter and actress, has been writing and recording since penning her first song on the piano at age six. She plays piano, guitar, some violin and harmonica.

The album opens strong with “Another Side of Me,” a power-ballad that introduces us to the band’s killer guitars and highly melodic music style. Buzzing guitars work in tandem with a driving drumbeat and Alec’s heavy bass, resulting in a crazy-good track. Zach fervently sings “All I want you to do is stop being you. You’ve got another side of me that I don’t want none of.”  The catchy, energetic “Counting Heartbeats” comes at us with a thumping drumbeat and shredded guitars, then we’re hit with Peach’s commanding vocals and, halfway through the song, assertive piano is introduced, adding complexity to the track.

“Do I Really Look Like I’m a Guy With a Plan Margot” is a standout track, and one of my favorites on the album. Its incredible arrangement – featuring thunderous guitar riffs, pummeling drums, intricate piano and soaring violin – give it a rock opera vibe. Zach’s powerful vocals match the intensity of the music. Plus, it’s a great song title!  The band channels the Red Hot Chili Peppers a bit on “Entitled,” with guitar chords similar to the awesome ones used in their classic “Dani California.” Peach’s vocals soar, aided by Zach’s backing harmonies, and the organ solo is terrific.

Peach’s considerable singing talents are on full display on the beautiful anthem “Feel the Light.” Her vocals soar (there’s that word again, but it so applies here) with the lush orchestration. It’s Zach’s turn to shine on the hard-driving “Fireball,” on which our ears are treated to more killer guitar work and Chloe’s powerful drums. The title track “Go For Broke” features harmonizing vocals by Zach and Peach, accompanied by a driving beat and gnashing guitars. Synth chords are introduced two-thirds of the way into the track, giving it a bit of a psychedelic feel. This is a great song.

“See Where We Go” is the first single, just released in advance of the album, and it’s definitely a radio-friendly track with a catchy hook, energetic upbeat melody and sizzling harmonic vocals by Zach and Peach. Watch the lyric video here:

The gorgeous ballad “Strength” is another standout track, and my absolute favorite. Musically, the song is very different from the others on the album, with only beautiful piano and violin, and Zach’s heartfelt vocals are captivating.  It’s the type of song that will have many people – me included – tearing up halfway through. The lyrics are so powerfully moving: “And I know it’s so hard when these walls are caving in. But I stare and wonder at this war you’re gonna win. Cause you give me the strength just to make it through the night when we’re with you. I’m in awe of all your wonderful acts of courage that you do. But this time we have is not all that’s left.”

With an abrupt jolt, the album closes with the hard rock gem “Tonight.” Blazing machine gun riffs intertwined with Eric’s shimmery guitars, heavy bass and crashing cymbals make this one exhilarating badass tune, proving beyond any doubt that Above The Skyline is a band with formidable talents. With an exceptional EP and full album now under their belts, they have a promising future, and I’m certain we’ll be hearing much more to come from them.

To learn more about Above the Skyline, visit their website. Support them by liking them on Facebook and following on Twitter. Subscribe to their YouTube channel and stream their music on Soundcloud. Go For Broke is available for purchase on iTunes and other platforms offering music for purchase.