I’ve been following New York alternative rock band COUNCIL for the past four years, and have featured them on this blog a number of times, beginning in 2016 when I reviewed their debut EP Rust to Gold, and most recently in June 2019 with the release of their single “Born Ready”. (You can check out those reviews under “Related” at the bottom of this post.) Through their signature sweeping melodies, bold instrumentation and anthemic choruses, COUNCIL’s dynamic sound has been compared to Imagine Dragons. Their magnificent life-affirming single “Rust to Gold” received worldwide acclaim, including being played at the opening ceremonies of the 2018 Winter Olympics and the FIFA World Cup, as well as on American Idol, So You Think You Can Dance, World Of Dance and Premier League. It’s been streamed more than 7 million times on Spotify, and ended up on my list of 100 Best Songs of 2017. 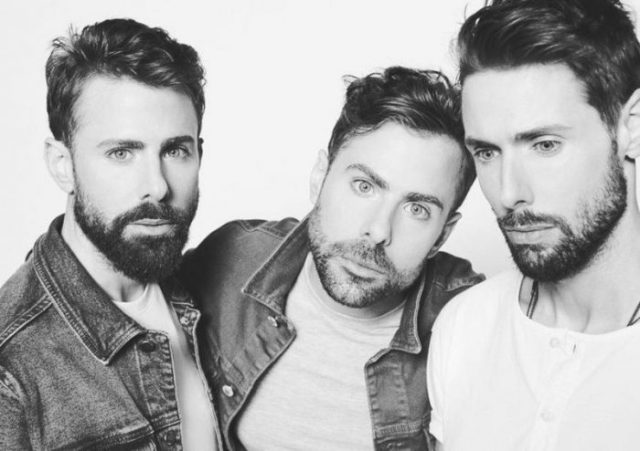 COUNCIL is comprised of three strikingly handsome brothers – Patrick, Doug and Andy Reeves. Patrick (bass and lead vocals) and Doug (drums) are twins, and Andy (guitar) is a year younger. Raised on a farm in rural upstate New York, they now split their time between tending the family farm and working on their music in New York City. The guys have just released their latest single “Savages“, which I’ve chosen as my New Song of the Week.

It’s a darkly beautiful and grandiose anthem, highlighted by a complex mix of dramatic industrial synths. The track opens with spooky synths and haunting plucked guitar notes that set an ominous tone. The music then expands with sharp percussive synths, deep bass and thunderous echoed reverb sounds that add a palpable sense of tension and foreboding. The instrumentals are really spectacular, and the finest of any song COUNCIL has done thus far.

The lyrics speak of a couple for whom the love that originally brought them together has turned into hate and acrimony for one another. Patrick fervently laments that they now behave like savages to each other, his vocals soaring to a passionate wail in the chorus.

All the plans that we made were just a lost cause
It’s like we turn a parade into a death march
A dirty angel landed on my shoulder
She said be calm and let the drums take over
I’m just trying to blow these ashes into sparks
We live like savages, savages…oh oh, savages!