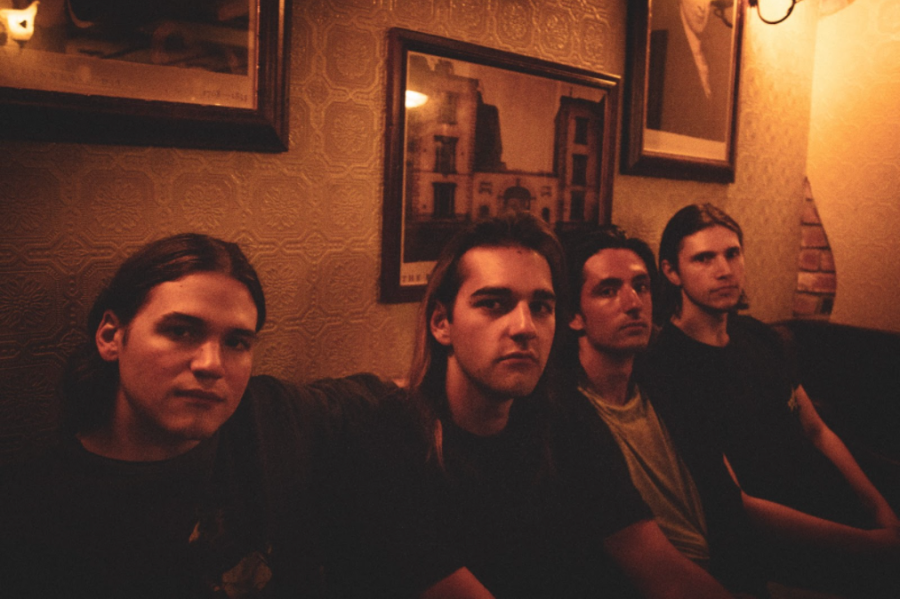 After being unable to perform live or even see one another during most of 2020, Vancouver, Canada-based alt-rock band Bealby Point are having quite a productive 2021. Starting with the release in February of their debut single “I’m So Bummed Out Right Now” (which I featured in a Fresh New Tracks post), they followed up in April with their second single “Telescope”. On July 15th, they dropped their third single “Talk To Me“, which I’ve chosen as my New Song of the Week. All three songs will be included on their forthcoming EP, due out later this year.

As with their previous singles, “Talk To Me” was recorded with veteran producer Matt Di Pomponio. About the song, the band explains “It’s about balancing heavy emotions with stifled logic – doing something you have reason to believe is wrong, but it feels right because you want it. The track follows a pair who previously revealed their intimate feelings to each other. Now, they have closed off their real feelings and resist the urge to speak from an open heart, in order to save themselves from the perceived consequences of revealing their true thoughts. They long for things to go back to how they were.”

The song opens strong with a wonderful swirling guitar riff, accompanied by a superb rhythm section, courtesy of Zack’s assertive thumping drumbeats and Jordan’s prominent chugging bassline, which is fucking fantastic! The dual guitar work by Clayton and Jack is brilliant, highlighted by what I’m guessing is Clayton’s blistering guitar solo in the final chorus. Jack’s colorful, emphatic vocals are marvelous, with a hazy lo-fi quality that reminds me a bit of The Strokes lead singer Julian Casablancas, even when they soar to a falsetto. We can feel his exasperation when he implores his partner to just communicate with him in an open and honest fashion: “Talk to me and I’ll talk back. I never lied to you. I don’t want that. But if you have to lie to me then I’ll lie back. And that’s the back and forth I can’t stand.”

“Talk To Me” is a terrific song, and with three excellent singles to their credit, Bealby Point have firmly established themselves as one of Canada’s best indie bands. Hell, they now rank highly among my own favorite indie bands as well. I look forward to hearing their upcoming EP.

Hailing from beautiful Vancouver, Canada, the Matlen Starsley Band are a five-member collective of seasoned and accomplished musicians who came together in mid-life to recapture some of the energy and passion that got them into the music business to begin with, and in the process create some great music. Comprised of Dennis Matechuk (lead vocals), Kevin Star (guitar & vocals), Don Lennox (bass & vocals), Jim Wesley (drums) and Darryl Hebert (keyboards, guitar, accordion & vocals), all are either former or current members of the Bryan Adams Band, The Ray Roper Project, Bad Moon Riders, Touchdown, Fandango, and Bad Allen and the Muscle Cats. Collectively, they’ve played thousands of shows in venues ranging from intimate clubs to major festivals in front of 20,000 fans, and bring a wealth of experience to the creation of their engaging style of music drawn from country, blues, roots and Southern rock.

In July 2019, they released their terrific debut album Rollin’ Again, which I later reviewed. Unable to tour or play live during most of 2020, the guys spent time writing and recording songs for their second album, due out later this year. The first single from the new album is “Makin’ Good Time“, which I’ve named my New Song of the Week. The song is a rousing Southern rocker, with feel-good lyrics about going out on the open road, experiencing freedom from responsibilities, and feeling the sun on your skin and the wind in your hair. “Wind on our backs, nothing but blue sky. Ain’t got no destination. No time or place we got to be. Makin’ good time, just gettin’ away.“

Musically, the song features the band’s reliably awesome mix of bluesy and slide guitars and jaunty honky-tonk piano, enhanced by a spirited horn section that really dials up the energy level. Dennis’ warm, earnest vocals are backed by the delightful Chandra Russell, whose soulful croons add some nice texture to the track. I love the many little touches the guys employ in their songs, like Kevin’s slide guitar mimicking a rolling train when Dennis sings the lyric “We’ll go down to the station tonight, we’ll hop on up when that train rolls by.” It’s a fine song that makes for a good time indeed!