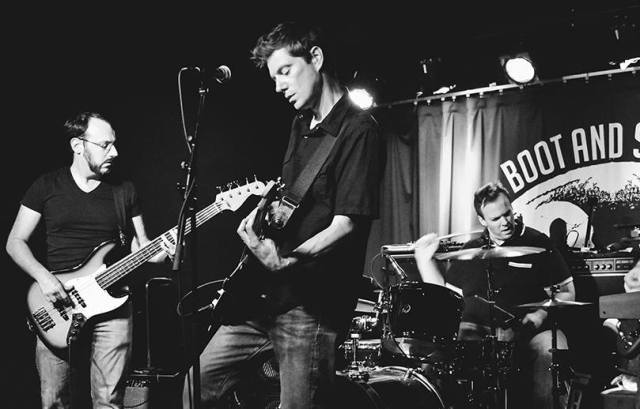 The Silence Kit is a Philadelphia-based band that plays dark indie alternative rock inspired in equal parts by post punk, shoegaze, neo-psychedelia, goth rock and avant-garde. Formed in 2002 by singer/guitarist Patrick McCay, the current lineup also includes Justin Dushkewich on bass, Darren O’Toole on drums & percussion, James Gross on guitar, and Bryan Streitfeld on synths. The band has released a number of albums, EPs and singles over the years, and in late October, they dropped their fifth album Fall Protection, which follows their acclaimed 2014 album Watershed.

Their music has been compared to bands like The Cure, The Smiths, Echo and the Bunnymen, The Psychedelic Furs, Nick Cave, and Television, but they’ve forged their own signature sound over the years, and Fall Protection sees the band continuing to grow and evolve, fusing together the atmosphere and intensity of early 80s post-punk and goth rock with the spirit of early 90s grunge and indie rock. In the recording of the album, the band had assistance from guest musician Kristin Kita, who played guitar on tracks #1, 7, 9, 10 and synths on #3, 5, 6, 8. The album was recorded and mixed by band front man Patrick McCay and mastered by Dave Downham.

“Supermarket” kicks off the album with dark, almost psychedelic synths and grungy guitars propelled by a strutting bass line and infectiously melodic drumbeat. McCay’s vocals are wonderful, with a vulnerable urgency as he croons “In the glow of the supermarket. I wanna feel like I’m in my own dream…again. I miss the kiss of your first attraction. I want to be in deep and sleepless love…again. Time and time again, I will find you. / Lucky me, you found me too.” “New Year’s Eve” speaks to the random nature of our lives year in and year out: “There’s no such thing as karma, or what other’s like to call fate. What you give is irrelevant, and what you get is random…” The music features exuberant layers of fuzzy and jangly guitars and powerful drums.

“This Time” serves up a deep, thumping bass line, delicious jangly guitars and the kind of strong, pummeling drumbeat that I love in songs. McCay’s emotionally wrought vocals seem to channel The Cure’s Robert Smith on this track. And the stunning chiming guitar work and sweeping melody on “Can We Skip This?” really showcase The Silence Kit’s strong musicianship. By the fifth track, the stellar, hard-hitting “Everything You Feel Good About,” I’m pretty well hooked on this band’s arresting music style and McCay’s slightly off-kilter but always captivating vocals.

The phenomenal “Wound” is another great example of what I’m talking about. The dark song starts off with a melancholy piano riff, accompanied by ominous synths, a deep, buzzing bass line and chugging guitars as McCay sings with a low, almost menacing voice. “I got this one thing on my mind. I’ve got to keep from losing you. / I wear this like it’s my own, a fine wound, so much to lose.” Two thirds of the way in, the tempo speeds up to a frantic pace as guitars rage and McCay screams “Don’t say a word” several times, then the music slows back down through to song’s end.

One of my favorite tracks is the brooding “Worry,” with its reverb-heavy layered guitars, sweeping psychedelic synths and tumultuous percussion that create an immense backdrop for McCay’s intensely passionate vocals. Another standout is the monumental six and a half minute-long “Never Say Goodbye.” Its haunting melody, lush, soaring instrumentals, and intricate guitar work are all positively breathtaking. The band keeps dazing our senses with raging riffs, dark synths, thunderous drums and raw vocals on “How Does it Feel?” and “Tablecloth.” McCay’s vocals sound decidedly British on the former track as he wails “How does it feel when you’re down and you find out everyone loves your best friend now? How does it feel when you’re gone?”

They seem to pull together all the elements of their signature sound and put them on full display on the gorgeous album closer “Discard.” The stunning reverb-heavy jangly guitars that open the epic track and continue throughout are fantastic, serving as the foundation for this magnificent song. Waves of sparkling, psychedelic synths wash over the guitars, aided by a deep bassline and layer upon layer of crashing cymbals and turbulent drums. It’s a massive song and the perfect ending to an equally massive album that leaves me awestruck.