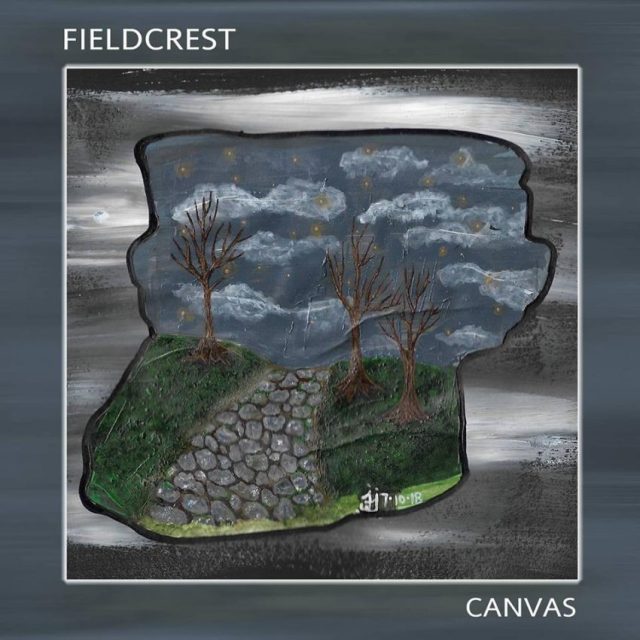 Guitarist/songwriter Will Thacker and singer/songwriter Jena Jones were both artists from small towns, each struggling on their own in the search for someone to work with to bring their songs to life and get them heard. After nearly giving up hope, Will almost jokingly posted an ad in his home town of Casper, Wyoming, and to his surprise and good fortune, Jena answered and Fieldcrest was born. (Jena is now based in Wyoming, and Will in Georgia.) Incorporating elements of their shared love of music influences ranging from 70s classic rock to grunge, they developed their own hard-driving style of modern rock, and began fleshing out songs Will had written, which they presented to the world with the release of their debut EP Meadowlark this past April. Building on the success of that EP, they continued writing and recording new songs, which are featured on their second EP Canvas, which dropped on September 14.

The songs address themes of self-identity, life changes and loss. First up is “Strange Girl,” a rather dark-sounding but optimistic song about female empowerment. Jena’s clear vocals are filled with urgency as she sings the lyrics encouraging a woman who’s marching to her own beat but unsure of her path: “You’re a little unconventional, strange girl. Don’t be discouraged, you are wonderful. I know you’re scared, but you will be OK. There is nothing in your way, except you.” Will’s guitar work is impressive as he delivers an array of textures ranging from delicate strums to jagged, gnarly riffs, all nicely layered over a throbbing bass line and anchored by a strong drumbeat. The track closes with a gently strummed guitar that gradually fades to quiet but, curiously, continues for another 30 seconds after the music ends.

Perhaps it’s to provide a moment of calm before the storm, which arrives like a thunderbolt in the form of the next track “Tuesday.” The song blasts through the gates with bombastic riffs of Will’s raging guitars and pounding drums. Jena emotionally sings of being stuck in a rut, feeling like she’s losing herself: “Sitting in the same place, same chair as I did last year. You’re in the same place. Hey do I know you? I don’t think so. Life’s too short for this.” The heavy modern rock goodness continues with the hard-hitting “The Silence,” a song about a couple who’ve gotten to the point where they’re no longer able to communicate with each other. I’m starting to sound like a broken record, but Will’s guitar work is so fucking good! He shreds and distorts his six string, coaxing riffs that sing, wail and soar, bringing goosebumps. The song has an Evanescence vibe, partly due to the fact I think Jena’s strong, passionate vocals remind me a bit of Amy Lee.

“Transitional” is a lovely instrumental interlude consisting only of a simple piano movement, along with the sound of falling rain at the beginning and end. It’s sublime, and I’d love to hear more music like this from Fieldcrest, as one of them is a pretty good pianist.

The final track is the dark and mournful “Empty.” a powerful song about dealing with loss. Will’s jagged and wailing guitars, combined with Jena’s emotionally-wrought vocals, dramatically convey the heartbreak and desolation that remains after the death of a loved one. It’s a phenomenal song.

In my grief I just can’t accept this
It’s a blow that knocks me to my knees
In my grief I held you last night but then I woke up empty
I’m gonna miss you forever
I would have never pictured life without you
You helped hold me together
How can I be strong without you
People keep talking at me about how God has called you home
A Part of me hopes they’re right cause you had so little time
It seems so unfair, I wasn’t ready to let you go

I will admit that it took a couple of listens for these songs to really click with me, but once they did, I was hooked on this band. Jena’s sultry and emotive vocal style is utterly beguiling and Will’s guitar-playing is positively badass! Canvas is a solid EP, and I look forward to hearing more from Fieldcrest very soon.