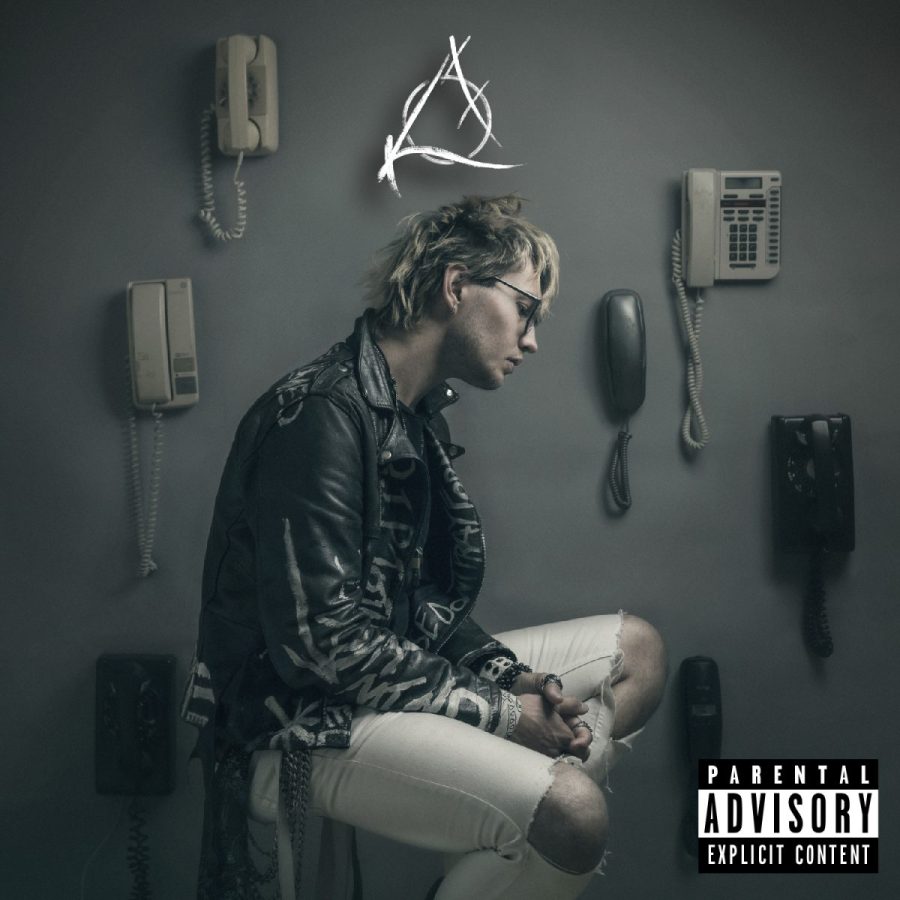 I’ve been following Canadian singer-songwriter and rapper Krosst Out since early 2017, when he reached out to me about his debut EP Life of the Party, an outstanding work that examined the darker aspects of party life, along with the sex, drugs and alcohol abuse that often go hand in hand. (You can read my review here.)  Since then, the hard-working artist has released a number of singles and collaborations with other artists, and just dropped his debut album Phone Calls With Ghosts, which was a labor of love for him.

Born and raised in the small town of Campbellford, Ontario, he first studied piano as a child, then took up the bass guitar in his teens. He moved to Toronto, where he started his music career, but earlier this year he relocated to Montreal with his girlfriend and fellow music artist Melotika (who I’ve also featured on this blog several times). Influenced by the music of artists such as Manafest, Eminem, Underoath, Rage Against The Machine, System Of A Down, Nas, and Marilyn Manson, he fuses hip hop with grunge, alt-rock and punk to create his own unique contemporary sound. And like a lot of hip hop artists, his songs draw heavily from his own life experiences, with brutally honest, introspective and raw lyrics.

Phone Calls With Ghosts is a decidedly bleak work addressing youthful mistakes, broken relationships, and the reality that nothing will ever again be what it once was. Krosst Out elaborates: “Ghosts aren’t just your run of the mill spooks, they’re the thoughts and actions of your past that torture you, the baggage you never seem to shrug off. I’ve spent so much of my life trying to hide my demons from myself and the rest of the world, that I thought it was time I faced everything head on. It was like these ghosts were trying to call [me] my whole life and I never picked up. Writing this [album] was my therapy, it helped me come out of this dark place I’d been in, and made me realize more about myself. Ghosts are real, they are the thoughts that torture you, the people you leave behind, the moments you never get back.“

The album was recorded mostly at Pink Distortion Music in Toronto, under the guidance of producer and mixer Adam Van Ameringen aka Rain, although “Intro (Preface)”, “Reckless” and “Black & White” were produced by another frequent collaborator Jor’Del Downz. The entire album was mastered by Sean Savage.

Opening track “Intro (Preface)” does just what it implies, laying out for us what the album’s about and setting the overall dark mood. Against a backdrop of throbbing, reverb-heavy bass accompanied by enchanting synths, Krosst Out tearfully pleads “Can you hear me? Can you really hear me out there? Pick up the phone!” A heavy beat then kicks in as he launches into an angry freestyle rapping tirade, recounting his early dreams of making it as a successful hip hop artists, the sacrifices he made and poverty he endured, and decrying those who never had faith in him: “Don’t ask me why I’m angry / Don’t ask my why I’m upset / These likes and these retweets don’t amount to much / Fuck every single person that ever doubted me / Cause I’ve been down and out.” The song ends with a woman’s voice (who I’m guessing is Melotika) saying, as if a telephone operator, “Welcome to phone calls with ghosts. Thank you for calling.“

“Funerals”, the lead single from the album that I reviewed this past April, touches on how Krosst Out has changed and grown since leaving Campbellford. It’s often challenging when leaving home and moving away to make a new life for ourselves, and though we generally maintain a sense of love and fondness toward family and friends we left behind, the distance and passage of time can complicate and/or diminish relationships. He told me the song title “Funerals” is a metaphor for the death of his old self. “I feel like I’ve just grown so much that I’m unrecognizable now, but at the same time, if I wanted to go [back] home I couldn’t. Also, the more you grow, the more you have people that will hate you for that.” The song has a heavy dub step beat, with a dramatic mix of spooky psychedelic synths, deep, throbbing bass and glittery keyboards creating a dark and moody backdrop for his impassioned free style rapping as he laments about the guilt trips foisted upon him by his mother and friends.

Krosst Out taps into his love of grunge on “Drive“, a cynical song about just saying fuck it, ditching your problems and heading out on the road in search of thrills, because nothing really matters anyway. “Cause I’m living for today, put that on my gravestone.” I like the dark vibes and Rain’s badass grungy guitar riffs at the beginning and in the choruses.

The haunting “Edges” speaks of a failing relationship, with the singer pleading to his partner to stop torturing him. Swirling keyboards contrast sharply with ominous harsh industrial synths to create a darkly beautiful backdrop for Krosst Out’s bitter vocals as he bemoans “We push, we pull, we scream, we shout, you say you want me out.” Guest vocalist Kyle Laird of Ontario metal band As the Structure Fails growls the chorus “You’re breaking my heart. So I’m burning these bridges. Stop tearing me apart. Cause I’m only these edges.”

On “Reckless“, he sings about not giving a fuck what others think of him to a guitar-driven melody over a dubstep beat. Rain’s grungy guitars make a return appearance on “Running in Traffic“, a song that continues on the theme of living life recklessly with a fatalistic attitude. With his voice brimming with emotion, Krosst Out raps “Never played it safe. Screaming here I am. Running in that traffic. Please don’t hold my hand. Gotta take my chances, gotta be a man. Now the ghosts are calling.“

“Background” is a bleak yet beautiful song about that seems to be about a person contemplating suicide. Over a sharp knocking beat and pulsating rhythm, Krosst Out and Rain layer haunting piano keys and a lovely strummed guitar. Krosst Out raps about his feelings of depression and futility, with Rain joining him in vocal harmonies on the chorus: “There are days I wish to just not wake up. I won’t be that shoulder that you needed to lean on. I can’t be that person that you need right now. Let me go, let me go into the background.“

The final track “Black & White” has a funereal grunge rock vibe, with a deep, reverb-heavy bass groove, accompanied by an almost haunting chiming guitar riff played by Andrew Falcao. Krosst Out ruefully raps the lyrics that speak of past regrets he has no desire to correct, and the pain he continues to self-medicate: “I never said goodbye to my friend that died at 25 / But these hard pills get easier to swallow. Don’t be alarmed, numbing myself is just part of the process. All of this shit is just hard to process /  You can erase me if you like, black & white. It makes no difference, so take me out.” The instrumentals continue for the final two and a half minutes of the song, highlighted by Falcao’s marvelous guitar solo.

Phone Calls With Ghosts is a marvelous little album with a huge, impactful sound. I love Krosst Out’s songwriting and lyricism, and while he doesn’t have a particularly strong voice, he’s a highly emotive vocalist and terrific freestyle rapper. It’s been a distinct pleasure following on his musical journey over the past four years and watching him grow as an artist. I’m so very proud of him.

3 thoughts on “KROSST OUT – Album Review: “Phone Calls With Ghosts””