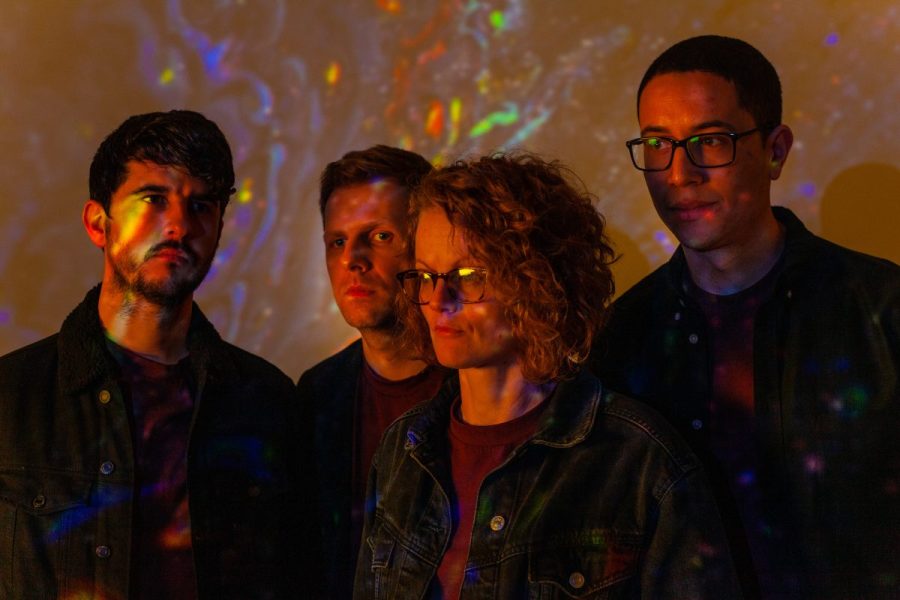 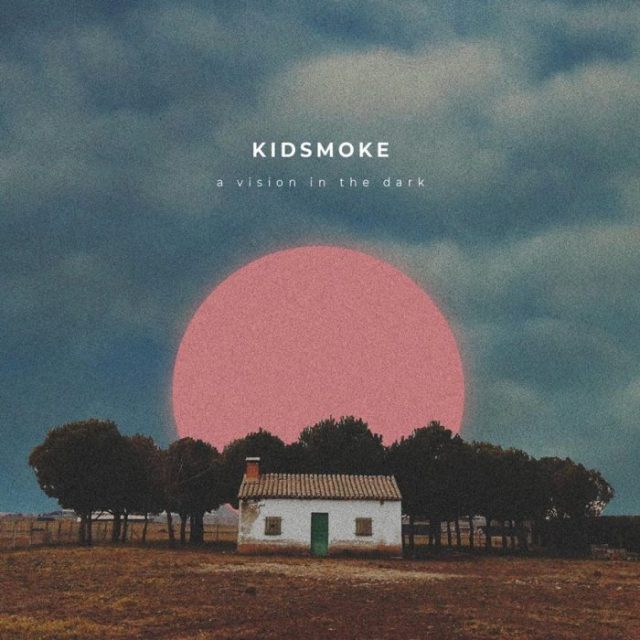 Kidsmoke is an exceptionally talented indie dream rock band based in the city of Wrexham in northeast Wales. On June 19th, after many months of hard work, they released their debut album A Vision in the Dark via Welsh label Libertino Records. Like so many bands, they’d planned to tour over the summer to promote their album, but those plans were dashed because of the coronavirus pandemic. Nevertheless, they decided not to delay the release of their album, and just wanted to get it out so their fans would have some new music to look forward to. And what a beautiful album it is, featuring 11 superb tracks. Their lush and beautiful guitar-driven sound is strongly influenced by such bands as Joy Division, The Cure, Wilco and The National, among others.

Formed in late 2012 by Lance Williams and James Stickels, who’d been friends since their school days, Kidsmoke was named after a song by one of their favorite bands Wilco. They released their first EP Higher in 2013, followed by a second EP So Long, Emptiness in 2015. Various members came and went, but the band finally came into its own with the addition of Sophie Ballamy and Ash Turner in 2016. Since then, the lineup has been Lance on Lead Vocals & Guitar, James on Bass & Vocals, Sophie on Guitar & Vocals, and Ash on Drums. The band continued to release numerous singles, along with an EP Save Your Sorrow in 2017, and had the experience of a lifetime when they performed at SXSW (South By Southwest Film & Music Festival) in Austin, Texas in 2019. 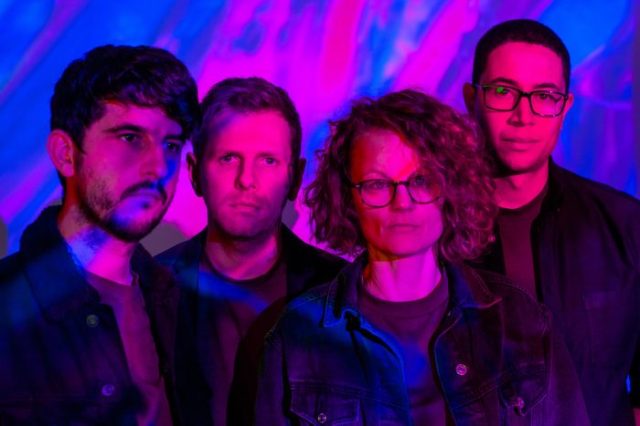 A Vision in the Dark opens with “Passenger” a lovely, uptempo song that sets the tone for the album. Its sunny, upbeat instrumentals, highlighted by jangly guitars and snappy drumbeats, contrast with the rather poignant lyrics “I’m moving on to God knows where, I’m dressed to kill the time I’m moving on, I’m a passenger.” Lance explained that the song is “about losing your direction in life, being swept along with the crowd and feeling helpless to stop it.” The song was chosen for NPR’s Austin 100 playlist.

The warm, summery vibe carries over to the next track “Layla’s Love“, with its swirling guitars and dreamy, ethereal melody. Lance states that the song “is a retrospective story of a relationship, where one partner begins to dwell upon the many ‘what ifs?’ we all face.” The male character in the narrative ultimately realizes that, though not perfect, the relationship remains strong and they’re still together: “Baby, the sun won’t rise over you. But I know we are still together. Layla’s love is the only love I’ll never lose.” I love the interplay between Lance and Sophie’s enchanting vocals as they sing “You gave me everything I had (I hope I did). Everything I wanted (you know I tried). But sometimes everything just isn’t enough.” This beautiful song stayed stuck in my head long after hearing it, and is one of the highlights on the album for me.

Kidsmoke continue to deliver the breezy feels on “Colourfield“, with its chiming guitars and cheerful, bouncy bass line, “Higher“, a beautiful reworking of a song from their first EP, and “She Takes You Under“, where they seem to pay homage to The Cure with bouyant jangly guitars and sparkling synths. Lance and Sophie’s vocal harmonies are particularly wonderful here, as well as on the brief but enchanting “Kaleidoscope“. The track is a chorus from an old song the band had previously written but never recorded, and serves as an interlude between side 1 and side 2 of the album.

Another standout track is “Rising Sun“, a high-energy tune with a retro 80s new wave vibe. The fast-paced driving rhythms and exuberant guitars are fantastic, and as always, the vocal harmonies are sublime. The lyrics speak to pushing back against others’ expectations, even when they’re coming from people who are closest to you: “Your days are done. I turn the black to blue. I turn the night to day. I’m the rising sun. I feel your love, I don’t want to follow.”

The hauntingly beautiful “Take Me to the River” is another re-imagining of an old song from their debut EP Higher. A fan favorite, Kidsmoke decided to re-record it for the album. The song was featured on an episode of the Netflix series Black Mirror, and is about being led astray from one’s path by negative influences. The bouncy, guitar-driven melody contrasts with the dark lyrics that seem to touch on a relationship doomed by the suicidal tendencies of one of the partners: “If I leave you, I’ll miss you, I’ll never make you mine. We’re sinking fast. We’re running out of time.” The richly layered guitars and pulsating bass are wonderful.

They continue to dazzle us with dreamy melodies and exquisite guitar work on “Still Dreams“, a deeply personal song Lance wrote based on his own experience having to come to terms with a life-changing event that made it hard for him to face the world. He elaborates “The song is about the expectations from family, friends or work to ‘get back to normal’ after something traumatic has happened. The overarching sentiment is about giving people the time they need to heal.”

Kidsmoke slows things down with “Little Easy“, a gentle song of thanks to someone for their love and support: “Little easy. You’ll never know how much you mean to me. You play the part, you play it right.” With its languid beat, mix of acoustic and electric guitars, and lovely vocal harmonies, the song has an early Fleetwood Mac feel, at least to my ears. About the inspiration for the song, James explains “I felt a little bit directionless at the time; I’d moved back home to Wales from Manchester for a job that didn’t work out and I was missing city life. I always aim for emotion in my music, but this one felt a bit more genuine…I just wrote how I felt.”

They save the best for last, closing out the album with “The Bluest You“, my favorite song of them all. Being a lover of music who cannot write a note of it, nor play a single instrument, I’m always awestruck at how people can create such gorgeous melodies, then bring them to fruition with various instruments. What Kidsmoke has achieved with “The Bluest You” is nothing short of spectacular, creating a song of such incredible beauty and depth that it renders me speechless. The glorious swirling guitars are as dreamy as they come, and James and Ash keep the spellbinding rhythm with their pulsating bass line and perfect drumbeats, respectively. Once again, I must make note of the stunning vocal harmonies delivered by Lance, Sophie and James. This song is honestly one of the most beautiful I’ve heard in a long while.

I’m not the only one for whom this song is a favorite. Lance said “This song is a live favourite of ours”, while James noted “This is my favourite track. I originally intended for it to be an instrumental – thankfully I soon decided against that idea. I knew from the moment it was written that it was destined to be the last track on the album.”

The song lyrics address mental health, specifically the effect someone’s issues have on loved ones around them. Lance explained: “It is a fly on the wall look into a household where one person’s depression is affecting everyone else who lives there. The song doesn’t address the feelings of the person suffering with depression, it is a sort of commentary from the viewpoint of the rest of the family.”

I’ve gushed about A Vision in the Dark throughout this review, so I don’t know what more I can say except that it’s an absolutely stunning album from beginning to end, and ranks among the very best releases I’ve heard so far in 2020. Listening to it is an immersive experience, as one gorgeous track flows into the next, keeping the listener in a continuous state of thrall. Other than for the minute-long interlude piece “Kaleidoscope”, the other ten tracks could all be hit singles, they’re that good.

7 thoughts on “KIDSMOKE – Album Review: “A Vision In The Dark””