True the Gray is a metalcore band from Denver, Colorado, consisting of Peter Vaughn (guitars, clean vocals, percussion, keys & overthinking to a fault) and Scotty Wilson (growls & screams, guitars, percussion & weed). They’ve been friends for years, and played together in the now-defunct Denver metalcore band Me Against Sunrise prior to forming True the Gray in 2016. Inspired by some of their favorite bands like Slipknot, Wage War and Polaris, True the Gray make relentlessly aggressive yet melodic metalcore rock. They cheekily describe their sound as “great background music for wine and cheese board parties and satanic rituals.” 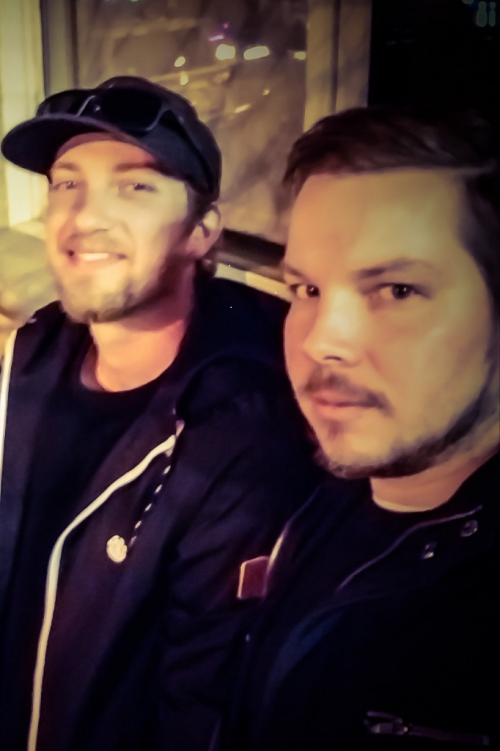 In 2016, they released a very respectable debut self-titled EP True the Gray, and followed up in May 2018 with a powerful, face-melting single “Greet Your Tragedy”, which I reviewed. That October, they dropped a three-track EP In A Wake, and last month (June 2019), they released their latest effort Bledstone, a five-track EP serving up more of their signature punishing wall of sound, dark lyrics and fearsome vocals. The EP was produced and mixed by Peter and Scotty, and mastered by Mike Kalajian. Tanner Lichty played bass (and mixed and mastered “The Old Haunt”), and drums were played by John Baptiste Maukbuke.

Kicking things off is “The Old Haunt“, which opens with what sounds like a stylus being placed onto a worn record album before an onslaught of raging guitars and pummeling drumbeats ensue. Scotty savagely growls the lyrics that speak to man’s inherent evil nature, and our internal struggles to conquer that evil in the hopes of finding our better selves: “There is a piece of everyone’s heart that is wicked from the start. But there’s a reason to feel we were placed here to heal and contrive new working parts.” As the song unfolds, Peter fervently sings “A way to cross the line. A face an image of lies. And through thoughts he finds a side. Through thoughts he finds the sight.” But alas, goodness is not to be found, as Scotty bitterly laments “And in conclusion a sweet delusion of fortune and good faith, but as I have no doubt, nothing works out for the bold and the brave.”

With nary a break in the action, “Lionize” explodes with a furious barrage of staccato riffs, crushing bass and hammering drums. It’s an exquisite track, both beastly and beautiful, and my favorite on the EP. The guitar work is spectacular, and really showcases the guys’ impressive musicianship. At the two and a half minute mark, everything calms down momentarily as we’re treated to an enchanting melodic guitar interlude before ramping back up for a dramatic finish. Peter and Scotty’s contrasting vocal styles complement and mesh together quite nicely on this and other tracks.

The guys unleash their sonic fury on “Dreamstealer“, a near-epic song with searing lyrics spoken from the perspective of a godlike figure to humankind. Angered by the mess they’ve made of earth and themselves, god concludes that the only solution is to flood the earth again, as was done in Biblical times: “I’ll fuckin’ turn the tide again. Let a wave take away your precious land./ You failed me. You all fell from my grace. So spineless. Empathy; I have none for the weak. Your price to pay. I gave you life. You meant everything to me. I’ll miss your sight. But you weren’t meant to be.” The heavy, distorted guitars and percussion fade out at around 4:40, transitioning to an atmospheric soundscape of haunting ethereal synths lasting another full minute, symbolizing the somber aftermath of such a global cataclysm.

“Eon” blasts through the speakers with a relentless volley of machine gun riffs, frantic guitar runs and jackhammer percussion. Now it seems the devil is the one ready to settle some scores, and accordingly, Scotty’s vocals are more savage than ever as he screams “I will open the sky, I will watch as your demons die! With certainty the moon will bleed and light our darkest nights!” Once again, Peter’s clean vocals provide a dramatic contrast to Scotty’s metalcore growls. True the Gray continue to lay waste to the airwaves with their intense metalcore mayhem on the final track “Deadwood“. The song’s meaning isn’t totally clear to me, but my take is that the godlike figure is telling mankind that he/she is no longer their god: “These hearts left hallowed. My feelings shallowed. And I’ll turn away. I can’t be the one you follow.” Scotty and Peter’s vocals have never sounded better, and raise the hairs on the back of my neck from start to finish.

Bledstone is a fantastic and well-crafted little EP. Despite it’s relatively brief running time of only 19 minutes, it’s a raging beast of unabashed ferocity and brilliant metalcore grooves. True the Gray continue to grow in terms of their songwriting and performance with each release, and Bledstone is clearly a step forward for the talented duo.