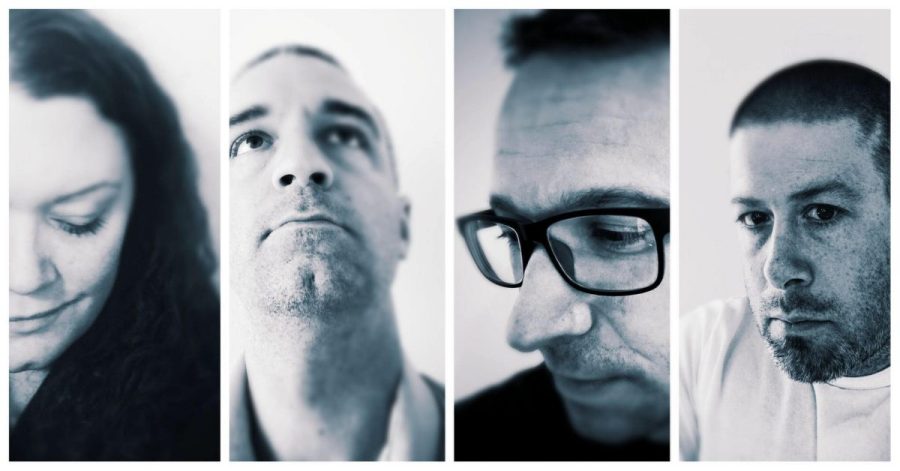 Sepia is a four-piece modern rock band from Baltimore, Maryland that I have the pleasure of reviewing today. Drawing from a myriad of influences ranging from rock, 90’s grunge and punk to folk and pop, they create exceptional songs with arresting melodies, intelligent lyrics and wicked riffs. Making all this great music are Ryan Beckelman (lead vocals, guitar), Derek Falzoi (drums, percussion),  Colleen Becker (bass), and Chris Gray (lead guitar).

Following up on their 2014 debut album …break my heart, in March they released their sophomore effort Drop Dead, Gorgeous.. – one of the better albums I’ve heard this year, with the absolute best title. The band describes their intent behind the album’s creation: “This…album explores the edgy side of everyday life. Carefully telling a story of love, loss, and self deprecation…without taking ourselves too seriously.  The album embraces the cynical world of life, relationships, competition, success and failures. Conflict and duality are often found in shades of gray, or more notably, “sepia tones”, but now can be heard and felt through Sepia tunes!”

The album opens with the hard-hitting “Change For You,” an exhilarating guitar-driven rock song that sets the tone for things to come. The thunderous percussion, grimy riffs and fuzzy bass are fantastic, and really showcase the band’s impressive musicianship.  Ryan’s passionately sings the biting lyrics that speak to someone who’s been all take and no give in the relationship: ” You lie like a rug, but I’m the one who’s trampled. / Why can’t you change for me, when I’ve changed so much for you. I never spoke my mind, cause I thought you’d get the clue. I’m looking right at you girl, but it’s me you’re looking through.”

“Cool” has a bit of a Nirvana vibe with grungy guitars and a strong driving beat. The distorted riffs in the bridge are terrific, as are Ryan’s vocals as he castigates someone who’s always putting him down “You’re so critical, when I stumble, when I fall. I hope you know, I hope you know this isn’t cool anymore.” One of the standout tracks that was also released as a single is “Marionette.” The song immediately hooks us with an enthralling little acoustic guitar riff, then heavier electric guitar, bass and percussion ensue. I love the song’s captivating melody, and the recurring guitar riff is marvelous.

“Home” is a really nice soft-rock track with gently distorted riffs, tambourine, and lots of crashing cymbals. The optimistic lyrics are from someone essentially telling his better half how much she means to him: “Your laughter, your laughter is all that I’m after. You’re my home and my life.” “Better Out Than In” is an emotionally-charged rock song that speaks to the personal struggle with alcohol abuse. “My insides turn to outsides out on the curb. My sign says occupied and please don’t disturb. Better out than in. Where do we begin. The bottom of this bottle is calling my name. With no regard for health and no one to blame.”

In addition to awesome guitar-driven rock, Sepia also creates some very fine ballads. One is “Delaware,” a lovely, bittersweet folk rock song about the end of a relationship where one of them checked out emotionally long ago. “And if you’re looking for your crazy train. You are on the right track. So spend your last days in Delaware. Out of sight and out of mind. I am doing fine. Your excuses are tired. But there’ll be time to sleep when you are dead.” Ryan’s heartfelt vocals are really nice, and the acoustic and electric guitar work is terrific. Another is “Blindside,” a gorgeous ballad that reminds me of a few songs by The Script.

“Born Yesterday” is a grunge-rock song that seems to be about how falling in love can sometimes make you lose all good sense and throw caution out the window: “You make me stupid. Like I was born yesterday. They said we couldn’t so we did it anyway.” “Hard to Tell” is a fast-paced rock song with a galloping drum beat and twangy guitars that impart of bit of a Western vibe. The band closes out the album with the powerful track “The Invincible.” Starting out with mysterious synths, the song erupts into a barrage of distorted guitars, buzzing bass and tumultuous percussion.  The lyrics speak of someone who’s shut themself off from emotional involvement, possibly from past hurts or the fear of being hurt again: “Figured out exactly who you’re supposed to be. Locked your chest and threw away the key. The invincible.”

Drop Dead, Gorgeous.. is a superb album from a band with a strong sense of who they are and what they want to express though their music. Their skill at writing engaging melodies and thoughtful lyrics, then expertly performing them, makes for an incredible listening experience. I hope we won’t have to wait another four years for Sepia to release their next album.