Tears For Fears are one of my favorite bands of all time. I’ve been a fan from the moment I heard their single “Change” back in 1982. (I lived in Los Angeles then, and though their previous single “Mad World” was a massive hit in the U.K., it got little airplay in the U.S., nor did it make the U.S. music charts, so I never heard it until later.) When their monumental Songs From the Big Chair – unquestionably one of the greatest albums of the 1980s – came out in early 1985, I fell head over heels in love (pun intended) with their music. So it goes without saying that I was thrilled to discover they’d released a brand new single “I Love You But I’m Lost.” It’s one of two new tracks that will be included on their forthcoming greatest hits compilation album Rule The World, scheduled for release on November 10.

Though they’ve remained active, including touring and performing quite a bit recently (my sister saw them a few months ago in St. Louis, where they appeared with Hall & Oates), the single is their first new music in four years. And it’s been 13 years since their last album Everybody Loves a Happy Ending was released in 2004, so we fans have longed for new music from Roland Orzabal and Curt Smith for quite some time. 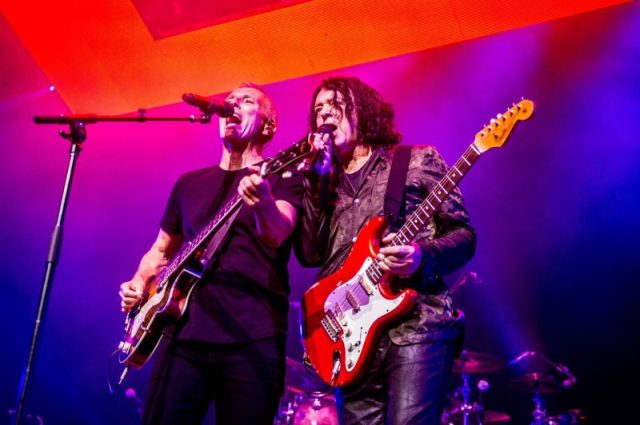 “I Love You But I’m Lost” is a gorgeous, exuberant song with a captivating dance beat that instantly grabbed my attention and held it straight through to the end. It features their signature sweeping orchestration, sparkling synths and lush harmonizing vocals, along with some terrific guitar work. Smith and Orzabal’s vocals are in fine form, thought Orzabal’s are softer and at a higher octave than he’s normally sung, but still very effective for the song’s dreamlike quality. Though not of the same caliber as their masterpieces “Everybody Wants to Rule the World” or “Shout,” “I Love You But I’m Lost” is a great song nonetheless. It’s incredibly gratifying that Tears For Fears is still relevant, and making new music for us to enjoy.

6 thoughts on “TEARS FOR FEARS – Single Review: “I Love You But I’m Lost””