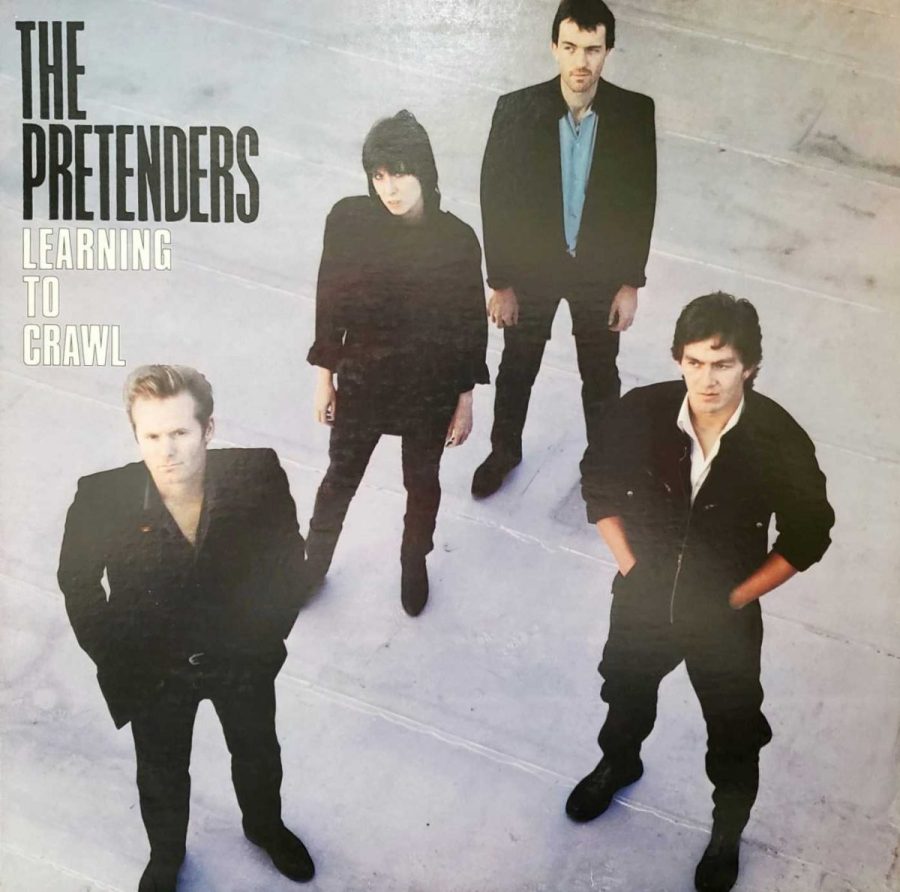 Though many music writers and critics believe The Pretenders debut album Pretenders is their best work (in 2013 Rolling Stone Magazine named it the 13th best debut album of all time), I prefer their third album Learning to Crawl on the strength of its outstanding tracks like “Back on the Chain Gang”, “Middle of the Road”, “Show Me”, “Time the Avenger” and “My City Was Gone”. While I’d liked their 1980 breakthrough hit “Brass in Pocket” well enough, it was the bittersweet “Back on the Chain Gang”, with its jangly guitars, haunting lyrics, Chrissie Hynde’s distinctive lilting vocals, and the chain-gang chant in the chorus that really caught my attention. To this day, the song remains one of my favorites of the 1980s.

Learning to Crawl was literally a phoenix rising from the ashes, as it was recorded in the wake of upheaval and tragedy for the band and, as such, many of its songs deal with various aspects of loss. In June 1982, after they finished touring in support of their commercially and critically disappointing second album Pretenders II, Hynde and fellow band members guitarist James Honeyman-Scott and drummer Martin Chambers fired bassist Pete Farndon over his diminishing performance resulting from his escalating heroin abuse. Two days later, Honeyman-Scott died of heart failure brought on by his own cocaine abuse. (Sadly, Farndon would die 10 months later by drowning in a bathtub after passing out from a heroin binge.)

Hynde and Chambers decided to soldier on in grief. In a 1984 interview with Rolling Stone Magazine, Hynde said, “What else were we going to do? Stay at home and be miserable, or go into the studio and do what we dig and be miserable?” A month after Honeyman-Scott’s death, Hynde hired Big Country bassist Tony Butler and Rockpile guitarist Billy Bremner, along with Robbie McIntosh (who would go on to become the band’s lead guitarist) to record a new single “Back on the Chain Gang” along with its B-side “My City Was Gone” (with its now iconic thumping bass groove that the execrable Rush Limbaugh later adopted as the theme for his radio show).

The single was released that September, and would become The Pretenders’ highest-charting single in the U.S. (“Brass in Pocket” is their highest-charting single in the UK.) Hynde wrote “Back on the Chain Gang” as a tribute to Honeyman-Scott and dedicated it to him. The song was also written during her strained on-and-off relationship with Kinks front man Ray Davies, and recorded when she was three months pregnant with their daughter. They split up for good six months later.

Through the rest of 1982 and into 1983, in between having and raising a baby and mourning Farndon (who died in April 1983), Hynde would periodically return to the studio with Chambers, new guitarist Robbie McIntosh and new bassist Malcolm Foster to record songs for an album she would name after her baby daughter Natalie’s first attempts to become mobile. In a sense, Learning to Crawl could also be a metaphor for The Pretenders regaining their footing as a band. The album was finally released in January 1984, receiving unanimously positive reviews. With regard to the notion that the album’s songs are mostly about loss, in that 1984 Rolling Stone interview Hynde was dismissive, saying, “It’s just a collection of 10 measly songs. It’s not a real important deal. I hate this sort of romantic or sentimental take people have on it—you know, the tragic demise, the reawakening. It wasn’t like that at all. I even regret naming the album ‘Learning To Crawl’, because it just sounds pathetic. I mean, I’m not sentimental.”

Be that as it may, many tracks do speak to a sense of loss, whether it be missing a loved one on “2000 Miles”, happier times on “Back on the Chain Gang”: “I found a picture of you / Those were the happiest days of my life.”, the “pretty countryside” surrounding her childhood home of Akron, Ohio ruined by urban sprawl and over-development on “My City Was Gone”, or one’s dignity and reputation in the wake of an adulterous affair on “Time the Avenger”: “Nobody’s permanent / Everything’s on loan here / Even your wife and kids / Could be gone next year”.

The band’s strong and incredibly tight musicianship is nicely showcased on several tracks. One of my favorites is the rousing album opener “Middle of the Road”, with its aggressive driving beat and stellar guitar work. Highlights for me are Chambers’ blasting drumbeats, McIntosh’s dazzling guitar solo in the bridge, and Hynde’s angry growl as she launches into her blazing harmonica solo toward the end. It’s such a great song, and I never understood why it wasn’t a bigger hit (it peaked at only #19 on the Billboard Hot 100).

Another favorite is the stunning “Show Me”, a hopeful plea for love and humanity as an antidote for mankind’s inherent tendencies for conflict: “Welcome to the human race, with its wars, disease and brutality / You with your innocence and grace restore some pride and dignity to a world in decline.”  The shimmery chiming and jangly guitars are gorgeous, and I love the intricate music touches such as the spacey little ascending guitar chord that plays when Hynde sings “Welcome here from outer space”.

“Time the Avenger” starts off with an infectious head-bopping beat, throbbing bassline and simple guitar riff, then gradually builds into a storm of Hynde’s and McIntosh’s intertwining riffs that’s downright exhilarating. The band seems to give a nod to Johnny Cash on “Thumbelina”, a lively rocker with a chugging train-style rhythm beautifully expressing the cross-country journey of a mother and her child as they head toward a new beginning.

One of the earliest songs recorded for the album was the beautiful cover of the Persuaders’ hit “Thin Line Between Love and Hate”, in which guitar was played by Billy Bremner, bass by Andrew Bodnar and piano by Paul Carrack (formerly of Squeeze, Ace and Roxy Music). “Watching the Clothes” is not a particularly strong track, though I do like its frantic punk rock vibe. The lyrics speak to the boredom of dealing with chores, but also to toiling in the service sector at a dead-end job: “I’ve been kissing ass / Trying to keep it clean / So that the middle class has a clean routine.”

In the years following the release of Learning to Crawl, The Pretenders would unfortunately continue to experience more internal upheaval and numerous changes in lineup. From what I can tell, some of it seems to stem from Hynde’s perfectionism and mercurial nature. Soon after recording sessions began for their next album Get Close, she declared that Chambers was no longer playing well and dismissed him. Discouraged at the loss of his bandmate, Foster then quit, leaving Hynde and McIntosh to record the rest of the album in New York and Stockholm with assorted session musicians. Despite all the upheaval, the Pretenders are still going strong in 2020, and in July dropped their 11th album Hate For Sale, which is actually pretty good.