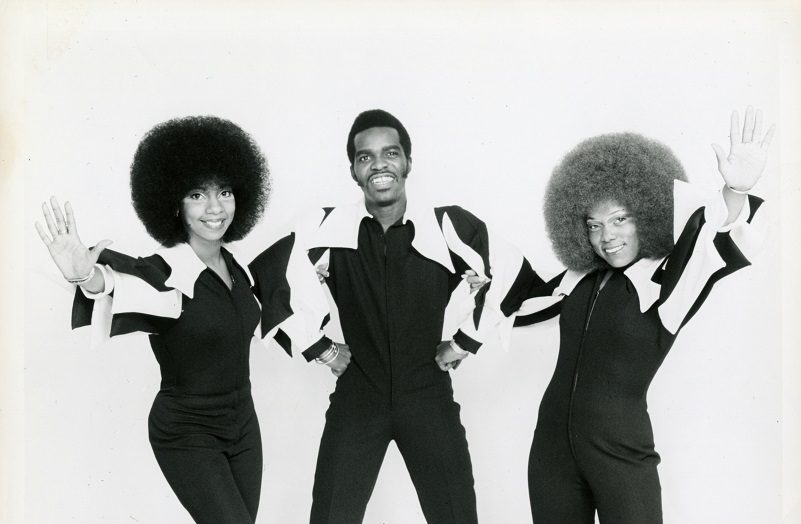 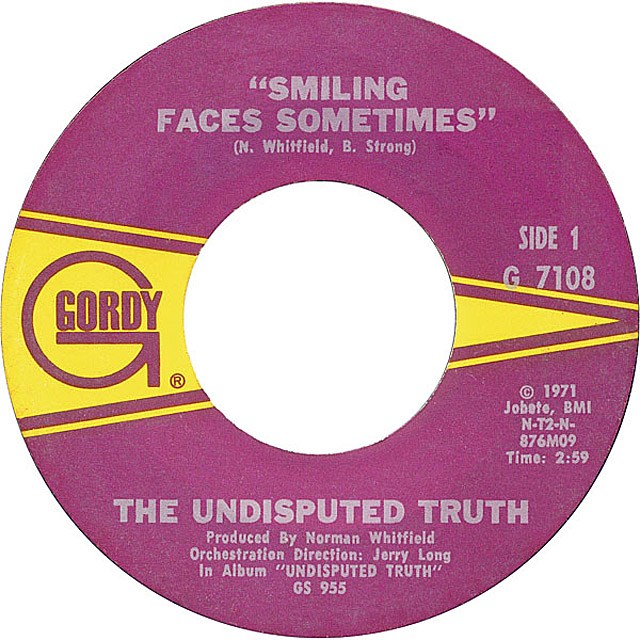 As a teenager back in the late 1960s to mid 1970s, I was madly in love with soul and R&B music (still am, actually), and among my favorite songs from those years is “Smiling Faces Sometimes” by The Undisputed Truth. Written by the renown Motown songwriting team of Norman Whitfield and Barrett Strong, it’s a dramatic psychedelic soul song about phony, back-stabbing people who do their friends wrong behind their backs. The song peaked at #3 on the Billboard Hot 100, but was a huge #1 hit in the San Francisco Bay Area, where I lived at the time.

Beginning in the mid 1960s, Norman Whitfield and Barrett Strong helped turn Motown into a veritable hit machine. Along with Smokey Robinson and the songwriting team of Holland-Dozier-Holland, Whitfield and Strong were instrumental in the creation of what was referred to as “The Motown Sound”, as well as the late-1960s subgenre of psychedelic soul. They were one of the principal songwriters for the Temptations, penning such hits as “Cloud Nine”, “I Can’t Get Next to You”, “War”, “Ball of Confusion (That’s What the World Is Today)”, “Just My Imagination (Running Away with Me)”, “Smiling Faces Sometimes”, and “Papa Was a Rollin’ Stone.”, as well as the brilliant “I Heard it Through the Grapevine”, which was a monster #1 hit for both Gladys Knight & the Pips and Marvin Gaye.

“Smiling Faces Sometimes” was first recorded by the Temptations as a 12:43-minute-long opus that was included on their 1971 album Sky’s the Limit. An edited version of the song was to be released as a 45 single, but was scrapped when one of the track’s co-vocalists Eddie Kendricks left the Temptations for a solo career in April 1971. Undaunted, Whitfield quickly turned to another psychedelic soul group he’d created known as The Undisputed Truth, and had them record the song, which was released that May. Whitfield liked to record dramatically different versions of the same song with different Motown artists (see “I Heard it Through the Grapevine”), so having The Undisputed Truth record “Smiling Faces Sometimes” was a no-brainer. He later had the Temptations record The Undisputed Truth song “Papa Was a Rollin’ Stone”, which became a #1 hit for them.

Whitfield created The Undisputed Truth in 1970 to further explore his interest in producing more songs in his psychedelic soul format, but also partly in response to fan criticism that he was using the Temptations as his personal plaything. The Undisputed Truth consisted of Joe Harris, Billie Calvin and Brenda Evans, all seasoned vocalists who’d previously worked with other soul and R&B acts.

It’s a darkly beautiful song with a sophisticated, yet menacing vibe thanks to a brilliant arrangement and stunning instrumentation. The track opens with what sounds like an abrupt horn blast, quickly followed by a deep bass line, wobbly guitar notes and a brief flourish of cinematic strings. Then, a rattle-based beat kicks in, nicely conveying mental images of a rattlesnake lurking in the shadows, which is alluded to in the lyric “beware of the handshake that hides the snake”. The intricate psychedelic guitar work is really fantastic, as are the jazzy horns and soaring strings, while that continuous rattling percussion keeps the eerie vibes alive. I love that all three band members share vocals, giving the song a fuller, more exciting sound. Their urgent, soulful vocals are perfect as they warn of the evil lurking behind our backs. I love this song.

Let me tell ya, the truth is in the eyes
Cause the eyes don’t lie, amen
Remember a smile is just a frown turned upside down
My friend, so hear me when I’m sayin’

Beware, beware of the handshake
That hides the snake
(Can you dig it, can you dig it)
I’m a-telling you beware
Beware of the pat on the back
It just might hold you back
Jealousy (jealousy)
Misery (misery)
Envy, I tell you, you can’t see behind