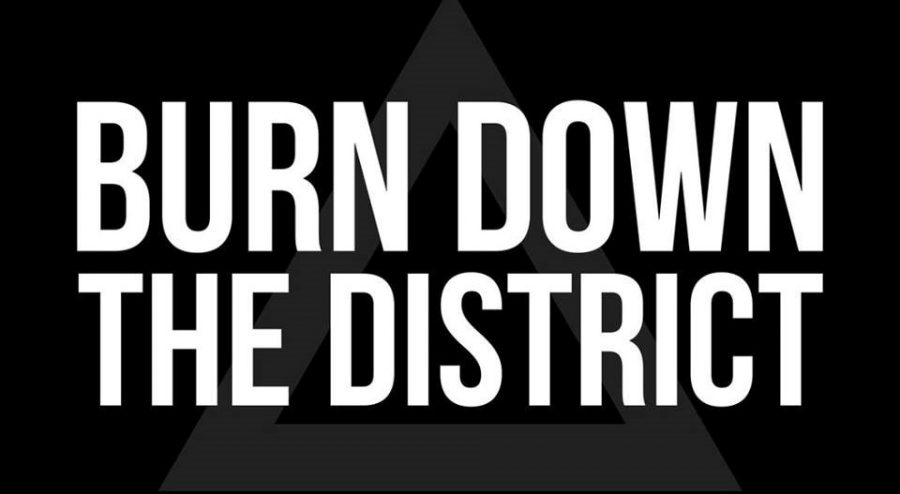 UK metalcore band Burn Down the District is aptly named, because their music leaves a charred path of destruction in its wake. The Chesterfield, Derbyshire five-piece released their debut EP This Is Not The End in October 2016, hell-bent on melting our faces off. Making this ferocious music are Dean Roberts (Guitar), Roy Shaw (Guitar), Dan Wilkinson (Bass), Paul Whibberley (Drums) and Steven Navin (Vocals).

The guys waste no time launching a full-frontal assault on our ears with the brutal first track “Burn.” With two guitarists and a bassist, they deliver a relentless onslaught of razor-sharp wailing riffs and pummeling bass, aided and abetted by Whibberley’s thunderous drums. Navin displays jaw-dropping vocal power as he screams at the top of his lungs: “We will burn it down! You can’t see the whites of, the whites of their eyes!”  The distorted guitar fadeout, which lasts nearly half a minute, is freaking awesome.

There’s no letup in the ferocity of the proceedings as we segue to “Flocks.” This track is a beast, with scorching jack-hammer riffs and Wilkinson’s bone-crushing bass. At this point, I’m wondering how it’s possible that Navin has a shred of vocal cords left as he wails: “I am so tired of flying in flocks! Give me my freedom, it’s all that I’ve got!”

The title track “This is Not the End” offers up more savage intensity, with merciless guitars and speaker-blowing drums. Roberts and Shaw lay down some mind-blowing power riffs as Navin screams the lyrics about refusing to give up, despite everything appearing hopeless: “This is a fucking wasteland! Grab my hand, give me a hook. This is not the end.”

This Is Not The End is a must-have for fans of serious metalcore, though with only three tracks it leaves us wanting more. That said, I hope the guys will bestow upon us some more brutal gems for our listening pleasure – and soon!

Stream or purchase their EP on Bandcamp