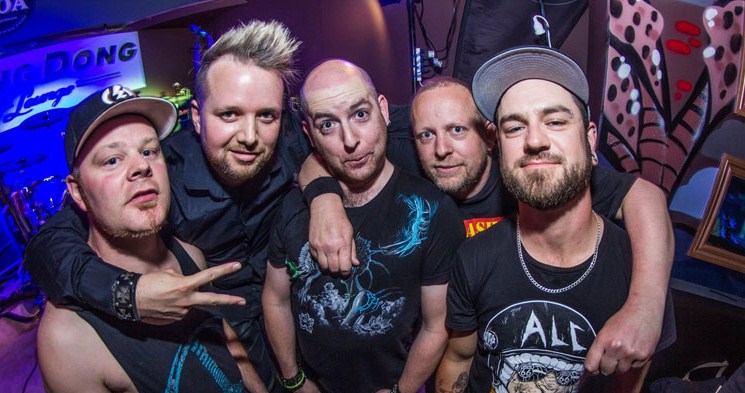 Bands that play pure, honest and unadulterated rock seem to be an endangered species, given the near-ubiquitous use of synthesized instruments, drum beats, and hand claps in so much music these days.  Don’t get me wrong, I really like some of that music. But once in a while I just want to hear some good old honest rock and roll, but with a fresh sound. New Zealand indie rock band Poison Skies, who hail from Auckland, nicely delivers. (New Zealand seems to be a hotbed of great indie rock music, as I’m hearing of more and more bands from that Down Under country.)

The five-member band formed in 2013, and includes Nick (lead vocals, guitar), Sam (rhythm guitar and backing vocals), Paul (lead guitar and backing vocals), Jamie (bass guitar) and Carl (drums).  According to their bio on their Soundcloud page, the band members were “already linked together through previous bands, gigs and tours” and, having a strong chemistry together, they decided to join forces and Poison Skies was born.  Given their collective years of music experience and having three first-rate guitarists, the band has a high octane, hard-driving sound that’s characterized by killer guitar work and pulse-pounding drums.

Their song “Eighty Six” is a powerful indictment of the stupidity and waste of war, set to an equally powerful thumping bass line and awesome multi-layered guitar riffs that will have the hair on the back of your neck standing up straight.

“City Streets” storms out of the gate with furious guitar and rapid-fire drums, and keeps up the frenetic pace all the way to the end. These guys can play guitar!  The highly entertaining video alternates between scenes of the band performing and a stressed out businessman who dresses as a clown and performs on a city street to make people laugh.  He eventually ends up at the bar where Poison Skies is playing and joins them on stage.  I can’t emphasize enough how much I love this song and video!

The band serves up another dose of mind-bending guitar on the high-energy “Victim Of Reality.”

I’m grateful to the band’s drummer Carl, who first contacted me on Facebook and introduced me to the band, because I’m now a huge fan!  If they ever tour in Southern California, I’ll be first in line to buy a ticket to their concert. Show these guys some love and like them on Facebook, follow them on Twitter, and subscribe to their YouTube channel. Their music is available for streaming on Spotify and Soundcloud, or purchase on itunes.

One thought on “Artist Spotlight – The awesome, pure rock of Poison Skies”