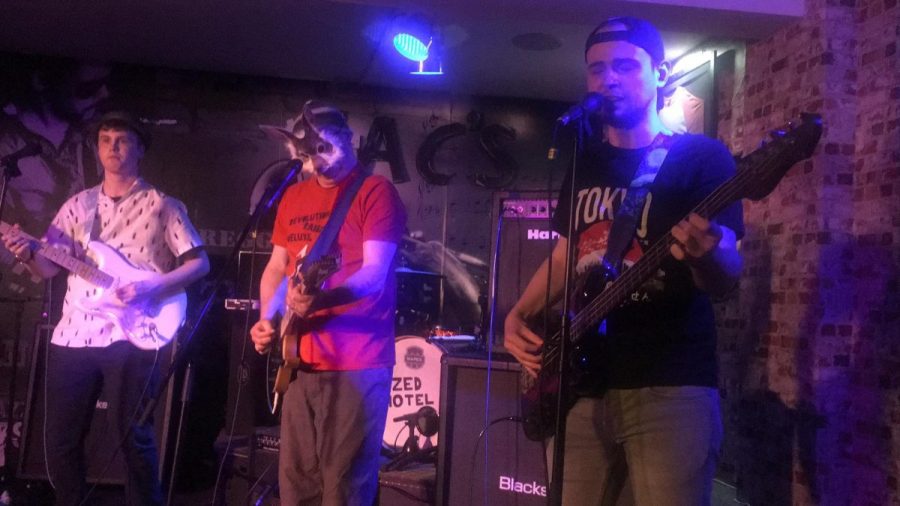 Revolution Rabbit Deluxe (RRD) is an indie rock band hailing from south Wales. Their innovative, alt-rock sound draws from Brit-rock, pop and punk influences, with meaningful lyrics tackling topical issues ranging from politics, culture and environmental justice to mental health. RRD started out as a solo project for founder and guitarist Rev Rab, but gradually evolved into a four-piece band. With the exception of Rev Rab, the band has an entirely new lineup since I last visited them a little over a year ago, when I reviewed their terrific debut album Tales From Armageddonsville. They’re now comprised of Rev Rab (guitar, lead vocals), Dan (guitar, backing vocals), Ben (bass, backing vocals) and Nick (drums), and recently dropped their sophomore album Swipe Left.

The album contains 12 tracks, and I’ll touch on what I think are the highlights. RRD gets right down to business on the opening track “Doomsday Clock/Cornucopia Croaked“, a rousing foot-stomper about mankind’s relentless assault on our planet. The track starts off with what sounds like a huge ticking clock in an empty room, backed by distant sounds of civil unrest. At the 30 second mark, the clock stops and we’re hit with a barrage of gnarly distorted guitars and hammering drums, driving home the urgency of the subject. Rev Rab issues a scathing assessment of our destructive tendencies: “We tore down the hills. We dug up the valleys. We pulled up the trees. Replaced them with concrete. And it’s goodbye world. Cornucopia croaked. Strangled by plastic. All our footprints soaked. Need to do something drastic.”

Keeping with the theme of earthly degradation, “Gods of Folded Bills” speaks to how our greed, over-consumption, and the downside of capitalism in general have led us down a path toward the looming prospect of our own demise: “We sold out to darker powers, and all the while, we pray to gods of folded bills. There’s no return, we’re driving down a one-way street. There’s no concern, as the rhino joins the queue.” The song has a cheerful synth-driven melody that belies the darker lyrics. So too with “Superglue“, its catchy new wave/psychedelic grooves in contrast with the more serious subject matter.  “Can’t you tell this fragile shell on which we live…is gonna give./The edifice you build is in your heart. A monument to pride. A prisoner inside. A prisoner to hide. The prisoner is you. And my advice is pull it down, tear it down, smash it down.”

“Picture of a Man” is a rather somber song about a man who puts forth a charming, gallant image that’s at sharp odds with his substantial shortcomings and cruel nature: “Don’t you paint a fine, fine picture of a man. So subtle, so refined, so charming, so cultured, so well-groomed. / A player, you play her well. You beat her, you cheat her./ Please leave her, relieve her. Just walk away. But freedom is what she wants from you. The one thing you can’t give.” “Guess Which Number” is a sweet tune, with sparkling synths and a lovely piano-driven melody, while “Father of Lies” seems to pay homage to David Bowie’s “Heroes” with its similar iconic driving riff early in the song.

One of my favorite tracks is “Punk Rock is Dead“, a bouncy punk-infused song about how societal pressure to conform killed off the free-thinking, anti-establishment spirit embodied by punk rock:  “Take a message. Subvert it. Pump it out as truth. Take a free man, create dependence, and roll away identity. Millions like him share the uniform. A corporate rebellion. Punk rock is dead. Who killed it? Punk rock is dead. You killed it. Punk rock is dead. We killed it.”

“Steel September Skies” is a complex and haunting track. It begins with a gently strummed folk guitar, then a thumping drumbeat ensues as Rev Rab describes what starts off as a bucolic scene that quickly turns ominous, perhaps symbolizing a nation formerly at peace but now plunged into an authoritarian regime or civil war: “A picture-perfect parade winds down my street. As idols clap and children cheer, frozen in time. I hear the crash of jackboots black. Let’s change the scene. Ignore the screams. My mother’s arms holding me tight, keeping my safe. I try to smile, but my belly aches, there’s flies in my eyes. And then the screams, my mother screams.”

Swipe Left is another strong work by Revolution Rabbit Deluxe. Given their unique, sometimes unorthodox sound and deep, thought-provoking lyrics, their songs often require a couple of listens to unpack and fully appreciate all the nuance to be discovered within them. Putting forth the effort pays off nicely once you come to realize the high quality of their music.