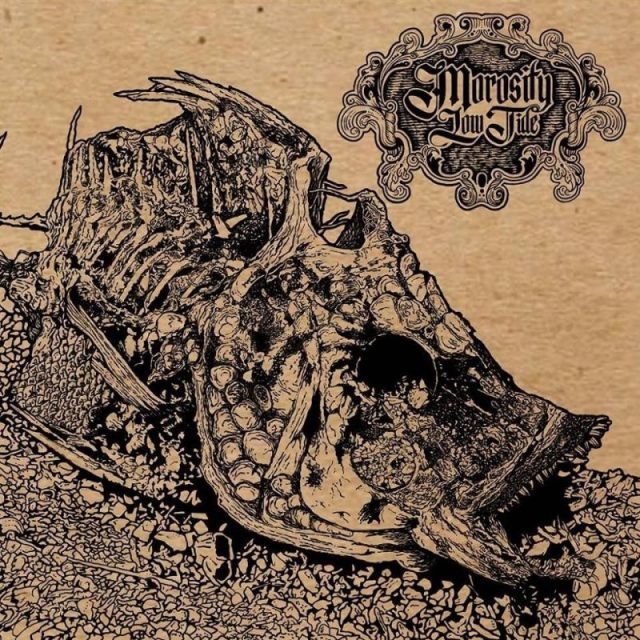 Unusual. Exotic. Captivating. Haunting. Stunning. Those are all words that come to mind when I listen to the album Low Tide by Morosity, a genre-bending band from Minneapolis, Minnesota. Formed in 2001 by childhood friends Jesse Albrecht (Lead Vocalist/Guitarist) and Dave Rowan (Guitarist) as a two-man acoustic group, they spent their early years developing a sound uniquely their own, and playing local gigs and opening for national bands. Wanting to expand their sound and musical reach, they added bassist Sean Bachinski in 2007, and two years later, Jason Wolfe (Violin, Guitar, Mandolin) and Nick Johnson (Drums) joined the band to complete their lineup.

Morosity released an ambitious debut album Misanthrope in 2011 to wide acclaim, and nearly six years later, in February 2017, they released their second album Low Tide, which I’m finally getting around to reviewing. While retaining many elements of their signature sound – complex song structures and melodies, richly layered guitars, crisp percussion, and generous use of the violin – with Low Tide the band takes a more eclectic and decidedly darker approach. Melding rock with tribal, psychedelia, folk and Middle Eastern influenced music through use of the mandolin and hammered dulcimer, they’ve created a powerful work of extraordinary beauty and depth. The album was produced by Albrecht, who records, mixes, and masters in his home studio Evensong Studios.

The album starts off with “Mind Over Matter,” a brief but mesmerizing track dominated by a gorgeous dulcimer riff. The song elicits several images and feelings for me, but I mostly think of a beautiful belly dancer moving to the captivating Middle Eastern music. The song immediately transitions to the mysterious “The Answer.” One of my favorite tracks on the album, the song features haunting guitar work that’s so incredible it gives me goosebumps. Furthermore, Albrecht’s vocals are amazing; he seductively croons the lyrics about questioning one’s belief system: “My eyes tell me that the truth’s not being told. What if all I see is just a lie?” He finally concludes that it’s all a sham as he wails “You’re all wrong” to a hard-driving guitar riff at the song’s end.

Without skipping a beat, we segue to “Ouroboros,” another mesmerizing (there’s that word again, but it’s just so fitting) track with a Middle Eastern vibe. The instrumentals on this track are rich and varied, and Albrecht’s smoky vocals have a chant-like quality. “Moon” has more of a traditional folk-rock sound, with some tasty layered guitars floating over Bachinski’s solid bass line.

The album plays like a rock symphony, with each track a string of movements, one flowing into the next. “Moon” transitions directly into “Smoke & Mirrors,” a powerful five-and-a-half minute long tour-de-force of a track about self deception. The guitar work is outstanding, and Albrecht’s raw vocals, which remind me a bit of the late Chris Cornell on this track, perfectly convey the biting lyrics:

Is all your smiling make-believe?
Who is it that you are trying to deceive?
What is it that you plan to gain?
A life of misery, false heightened sense of fame. It all goes away…

The most powerful, and dark, track on the album is “Death Grip,” which speaks to the epidemic of gun violence that’s become so pervasive in America today. The folk-rock song is chilling, yet has an interlude containing whistling that comes off as almost carefree, in sharp contrast to the subject matter. A similar treatment was used by Foster the People on their hit “Pumped Up Kicks.” The disturbing lyrics are from the twisted perspective of a mass shooter:

The video shows serene images of the countryside and a cemetery, interspersed with a shadowy figure walking, driving, and at a shooting range. At the end, people are shown having fun riding bikes, bowling, and at a demolition derby, presumably oblivious to any potential danger.

“Limbo” features Wolfe’s sublime mandolin work, accompanied by lovely violin and subtle guitars. Albrecht’s urgent vocals are marvelous, as are the backing chorus. The violin and acoustic guitar take center stage on the melancholy title track “Low Tide.” The gloomy lyrics speak to feelings of being worn down, and that life is slipping away, but you’re not yet ready to give up:

From stone to sand, I feel it all sifting through my hands.
Worn to bone, nothing left just a skeleton.
Bottoms up and cut me down to size.
Drag me out and wash me in the tide.
Give me life now no I don’t wanna die.
Low tide

But by song’s end, the feelings of hopelessness, regret and despair have become too great to bear, thus death would be a welcome relief:

Can not maintain the pain the rain is welling in your eyes.
Pleasure came back down the drain swallowing the light.
Playing blame insane it’s you that’s done this to your life.
Missing sane tired and drained thoughts of the other side.
Pick me up and bathe me in the light.
Drive it down and bleed me dry.
Take my life I’m ready to die.
Washed away in the low tide.

The band keeps with an oceanic theme on the funereal album closer “Adrift.” The languid track is moody, yet peaceful, with the sound of waves drifting in and out as a somber guitar plays. Like the music, Albrecht’s low, echoed vocals are dirge-like, yet somehow comforting. The music and vocals end at 3:30, and we’re left with sounds of the surf for another 20 seconds, followed by birds singing in a gentle breeze, as if to signify the gradual and peaceful passing away of a life. Morbid, but beautiful at the same time, which fairly well sums up the album.

Morosity is currently working on a third album, and I eagerly look forward to hearing more songs from these exceptionally talented and creative musicians.