As I’ve stated before, one of the things I love about Twitter is finding out about new indie artists and bands; in two years I’ve discovered over 5,000! I’ve also made friends with more music lovers and bloggers than I can count, who’ve turned me on to even more musicians and bands. So it was my lucky day when Robert Horvat, who has an excellent blog called Rearview Mirror, contacted me about the indie band Watergod.

Based in Austin, Texas – a city with a thriving music scene that’s produced scores of country, blues and rock artists and bands – Watergod rose from the ashes of their previous psychedelic space rock band Psychonaut. They developed a fresh sound, but retained a bit of their psychedelic sensibility. Comprised of Ethan Schrupp (guitar, vocals), Justin Wilson (bass) and Nicholas Key (drums), Watergod takes an organic, highly collaborative approach to their songwriting and the development of the sound for each track. They’re essentially DIY, but enlisted the help of friend Sean Lochridge in the recording and mixing of their self-titled debut album Watergod, which dropped on the 1st of August.

In an interview with Robert Horvat of Rearview Mirror, which you can read here, Ethan explained the inspiration and/or meaning behind the band’s name, album title, and each of the tracks:

“To me [Watergod] represents renewal and rebirth. We had taken some time off after our last band [Psychonaut] dissolved, so when we came back together we wanted a fresh start. The inspiration [for the album] was what was going on in my life at the time. Amygdala is about a breakup,  Whaler and Causality were about a girl I was hooking up with after that,  Helios is about being burned by someone you’re trying to help, Motion is about being ostracized for being yourself, Vectors is about succumbing to temptation, and Spirals is about dealing with anger.”

Interestingly, all the song titles consist of a single word. Their music is unconventional, delivering unexpected melodic shifts, guitar change ups and quirky vocals. All this works beautifully to capture and hold our attention, not only within a song but throughout the whole album. We’re compelled to really listen to each nuanced sound and vocal twist and turn, keeping us in a continual state of surprise and wonder. Not one thing about their songs are predictable, and Ethan’s vocals seem to sound different on every track. 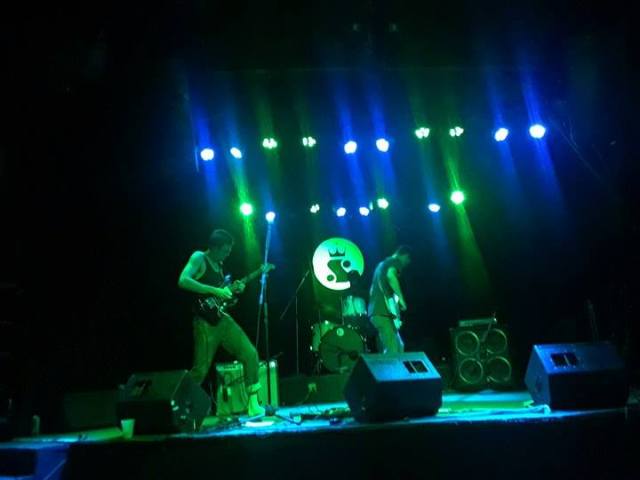 Ethan’s falsetto crooning introduces us to the opening track “Amygdala” then some really lovely guitar work enters, accompanied by snare drums and a light touch of cymbals. All instrumentals ramp up as the track progresses. The guys inject just a touch of jazz on “Causality,” featuring some really fine nimble guitar work, a smooth subtle bass line and lots of gently crashing cymbals. There’s something about Ethan’s vocals that are so beguiling as they go from smooth and comforting to soaring falsetto and back again. The little guitar solo in the last 30 seconds is pure delight. “Vectors” borders on psychedelic with an underlying funky groove, making for an unusual and fascinating track. Ethan’s fuzzy vocals occasionally become echoed with vibrato, adding an otherworldly aura.

“Helios” is a perfect example of how Watergod delivers the unexpected. Starting off with a gorgeous, delicate and somewhat melancholy riff, the track has a bit of the psychedelic feel of The Doors’ “The Crystal Ship.” Ethan sings of seeing a deceitful person’s true self in the light of day: “With you nearer, I see you clearer. I see you for what you really are. In the sun.” Halfway through, the guitars become heavier and grittier, as Ethan shrieks his vocals, some of which are distorted. It’s an epic track.

So too with “Whaler,” which flows back and forth from a languid beat with a dreamy atmospheric vibe to a faster tempo with bluesy guitar and heavier percussion. “Motion” is the most psychedelic-sounding track on the album, with heavier bass overlain with shredded, distorted and reverb-heavy guitars. And just as we’ve gotten used to the slow tempo that predominates, the guys dial it up at the close.

Album closer “Spirals” is more melodic, starting off with jangly guitars over a pleasing steady beat. The lyrics speak of letting go of anger: “It will hurt you so much more before you finally learn to let it go. / It’s hard to see the change when it’s so slow.” Ethan’s vocals rise in emotional impact as the guitars become grittier and the percussion more aggressive, until he literally shouts the lyrics later in the song.

If you like music that’s experimental and unconventional, Watergod delivers it in heaping quantities on this stellar album. It has some of the most unusual and intellectually stimulating music I’ve heard in a while, yet it’s still accessible and incredibly satisfying.

Connect with Watergod on Facebook and purchase their music on Bandcamp